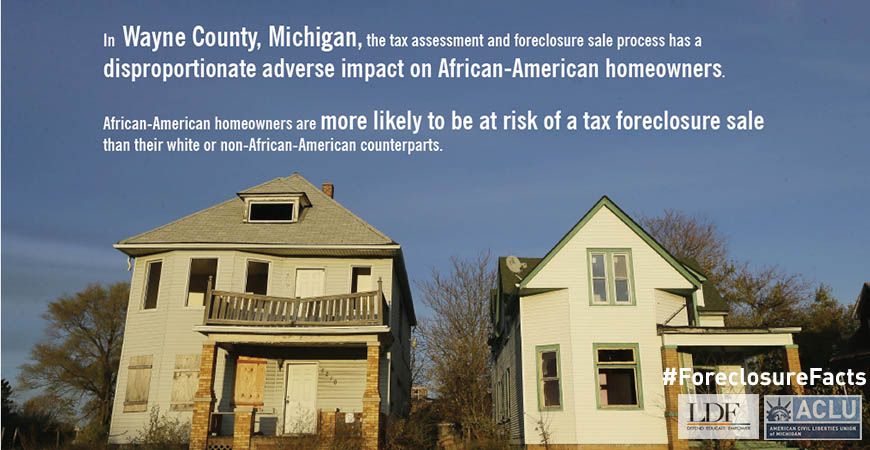 African Americans in Wayne County are suffering from a tax foreclosure crisis more severe than any this region has seen since the Great Depression. But unlike the Great Depression, the homeowners today are at risk of losing their homes for taxes they never should have been required to pay in the first place.

The ACLU of Michigan, the NAACP Legal Defense and Educational Fund, Inc. and lawyers from Covington & Burling LLP filed a class-action lawsuit against the Wayne County Treasurer, Wayne County and the City of Detroit on July 13, 2016 to challenge illegal, racially discriminatory tax foreclosures that have pummeled African-American homeowners in recent years.

Read more about the plaintiffs below. 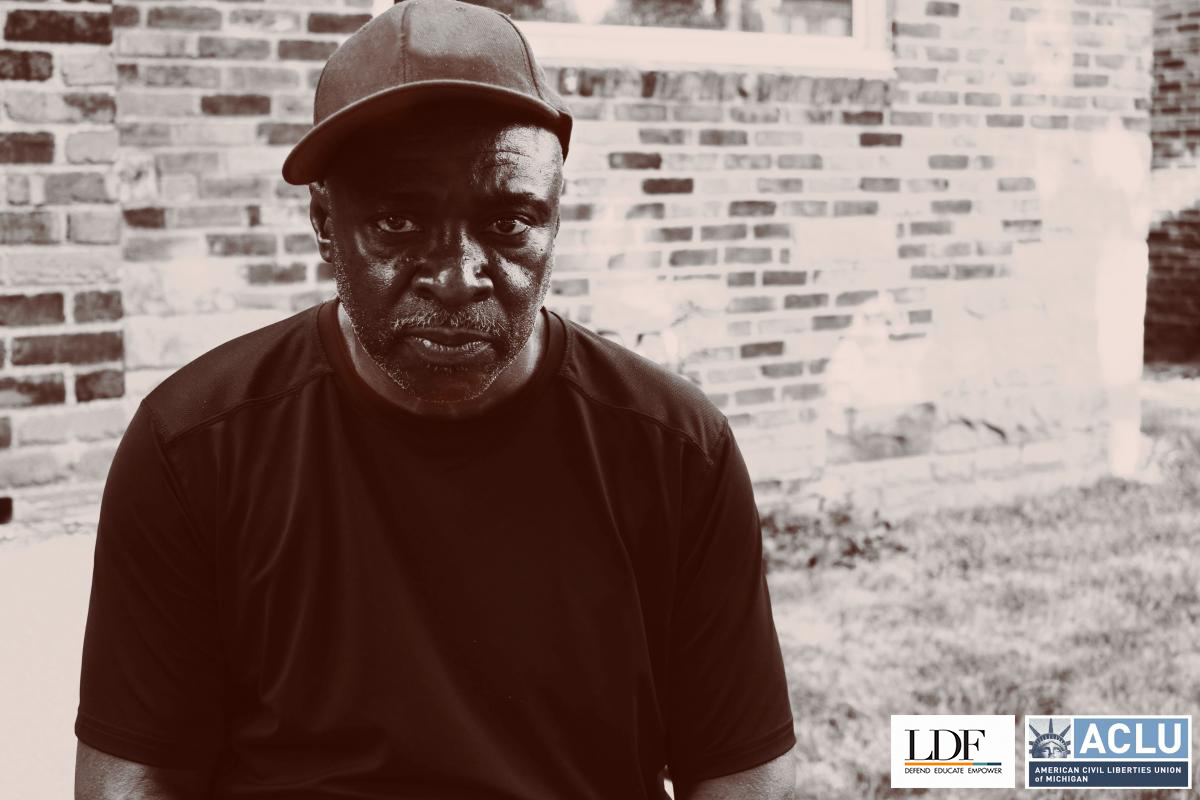 The City of Detroit had the wrong man, and Walter Hicks knew it.

Watch: Walter Hicks tells the story of how he got stuck with an extra tax bill

In 2014, the 57-year-old Hicks, a disabled Detroit homeowner who lives off of barely more than $15,000 a year in social-services benefits, went to the city municipal building to apply for a poverty exemption from his property tax bill. Although an appraisal of the fair-market value of the home estimated it to be worth about $9,000, an overinflated assessment by the City of Detroit in 2013 had bloated the supposed cash value of Hicks' home—to more than $40,000.

"I just want to be treated fairly," says Hicks. 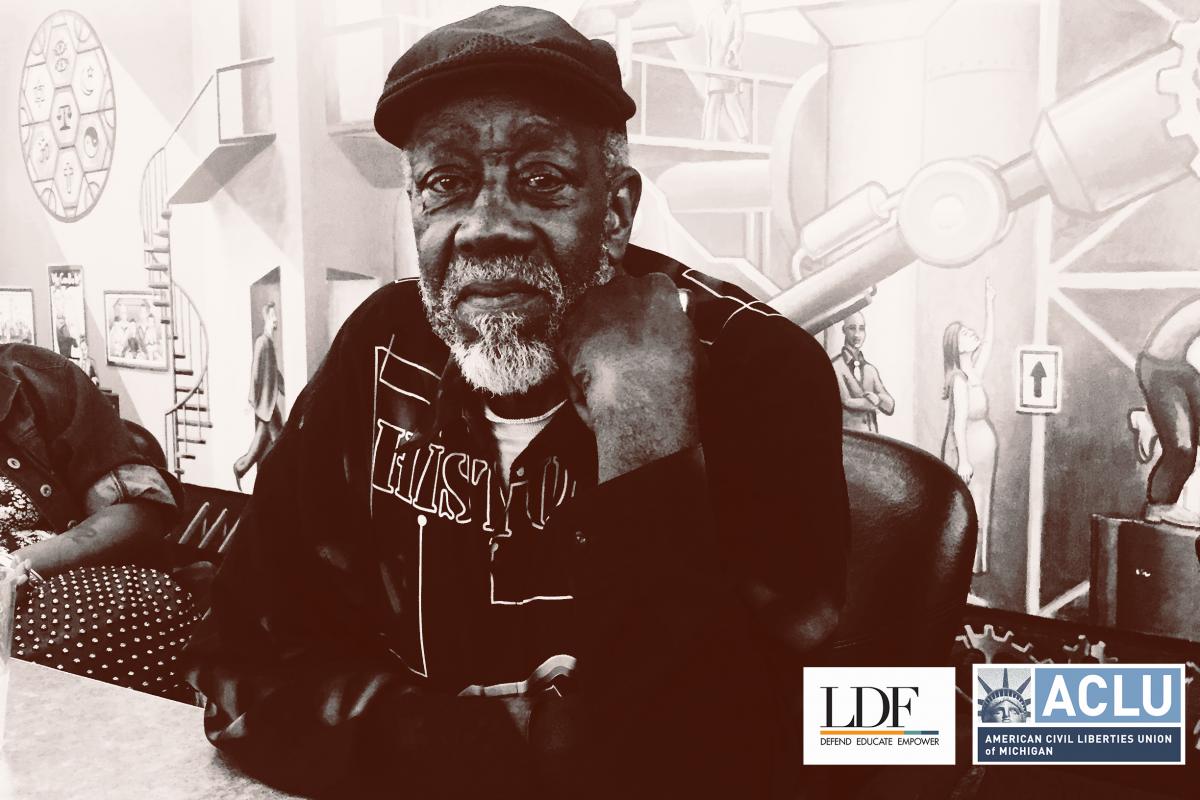 Every year from 2011 to 2014, Moore tried to apply to the City of Detroit for a poverty exemption that would discharge him from the onerous and unfair Wayne County tax obligations that had spawned from the city's gross over-assessments of his home's market value.

Every year from 2011 to 2014, the city mailed Moore the highly detailed application mere days before the deadline—making it impossible for him to pull together the vast amount of information needed to complete the form before time expired.

And so, every year from 2011 to 2014, Moore's application was dubbed "incomplete" and the elderly Detroiter was denied relief from the growing tax burden that the Wayne County Treasurer had illegally levied against his home based on the city's erroneous, over-inflated assessments.

Still, even though the city granted Moore poverty exemption in 2015 and 2016, he is facing foreclosure on his home over a $2,023 tax bill. That's because in 2013 his home was, based on the city's assessment, given an equalized value that corresponds to a cash value of $22,932.

However, an appraisal of the home's fair-market value revealed that Moore's property was worth about $2,000 in 2013—a far cry from the bloated city assessment that wrongfully driven up Moore's property taxes.

But Moore is hopeful that the county will eventually reconsider the unfair, exorbitant taxes it's levied against him as a result of exaggerated city appraisals.

"This has been a problem for me for many years now," he says. "It's time for the city and the county to get it right." 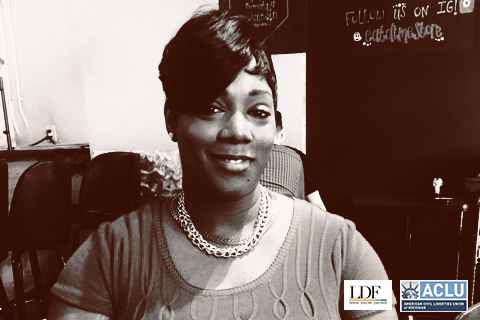 The Director at Large for the MorningSide Community Organization, 33-year-old Dewhannea Fox has worked arduously to lead the eastside community toward a brighter future.

Now, though, Fox finds herself struggling to secure her own future in the neighborhood in the face of mounting tax woes.

"The City does not give people the necessary information and tools they need to help themselves."

A wife and mother to two children, Fox bought her home in 2012. It was the home she'd grown up in and that her mother had owned for more than 25 years. When the home was appraised according to its fair-market value, the property was assessed at $16,000.

But that didn't stop the City of Detroit from over-assessing the value of the Fox home. Based on erroneous, inflated city assessments, the true cash value of the home was calculated to be about $47,078—a more than $31,000 increase over the earlier, independent appraisal.

As a result of the bloated assessment, the Wayne County Treasurer claims Fox owes $5,249 in back property taxes from 2013 and earlier.

While Fox reiterates that she shouldn't have to pay taxes based on wildly exaggerated assessments, the community leader says she's more than willing to pay what's fair.

"Just assess me properly, and I'll pay it." 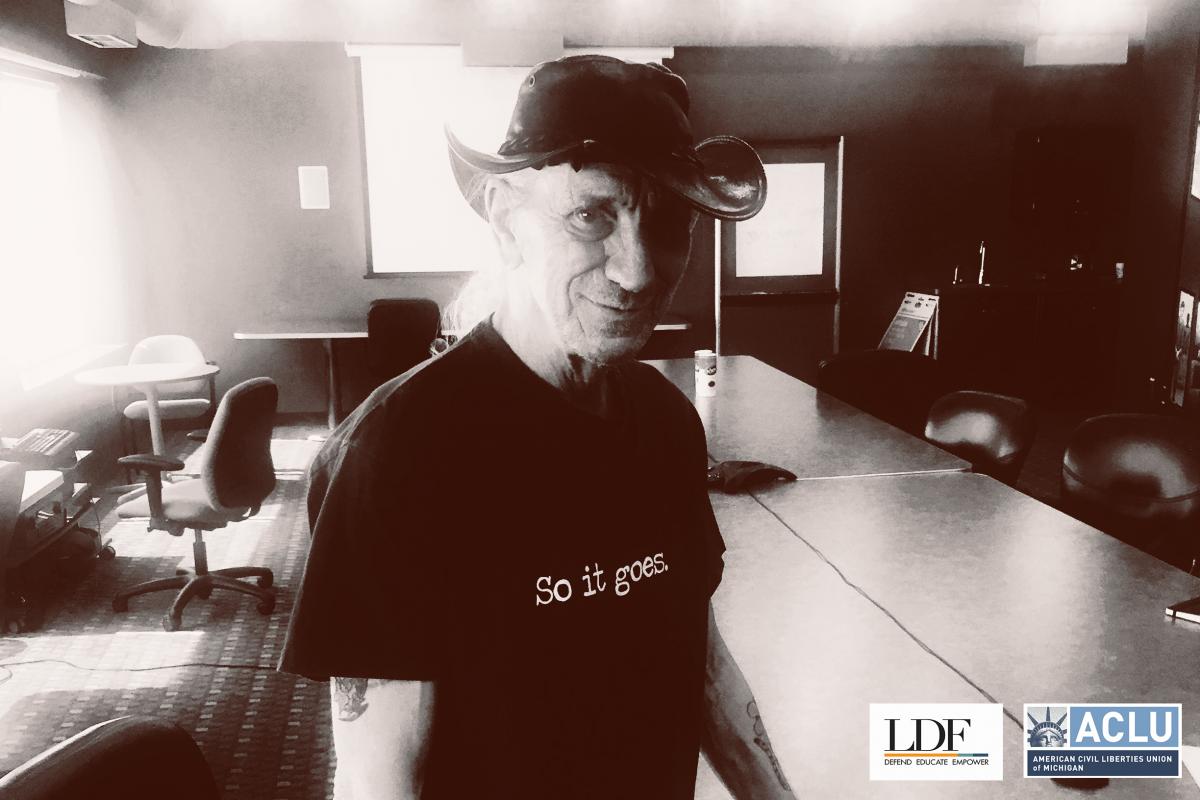 Edward Knapp didn't just buy a new home five years ago when he moved back into the Brightmoor community where he's lived off and on since birth. He also put a down payment on a new life.

A Navy veteran who had served during the Vietnam War, Knapp struggled with homelessness following his discharge. But in 2011, he determined that he would get back to a productive life.

That year, he came home to re-establish himself—and the home he bought on the 14000 block of Dacosta in 2011 became the anchor for the former sailor's new life.

"I was getting back on my feet, so I wanted a house of my own," he says.

In time, Knapp, who relies on social security, ran into financial trouble that left him too poor to pay his taxes—which had resulted from his home being overvalued by city property assessors.

Because his income falls below the federal poverty line, Knapp sought a poverty exemption in an effort to save his home from tax foreclosure.

In 2014, he drove downtown to Detroit to apply for the exemption. After parking his car at the only space he could afford—some 20 blocks from Detroit's municipal building—Knapp walked to the building and waited 45 minutes to speak with someone about his application. During the visit, which he describes as "grueling," he was told the application would be mailed to him.

When he didn't receive the application after several weeks, Knapp drove back to the municipal building to find out what was happening. He was told yet again that the application would be mailed. He went back on at least four separate occasions.

"All they would say is: 'You're in the system. They should send it,'" he recalls. "It is never clear who 'they' refers to. Coming out of the city assessor's office, you never learn anything more than you knew when you went in."

Eventually, the application did arrive—one day after the deadline for the application already had passed. Because the document came so late, Knapp didn't apply for the exemption.

Now, at age 67, Knapp only hopes that the current challenge to the tax foreclosure crisis will be enough to keep him afloat. 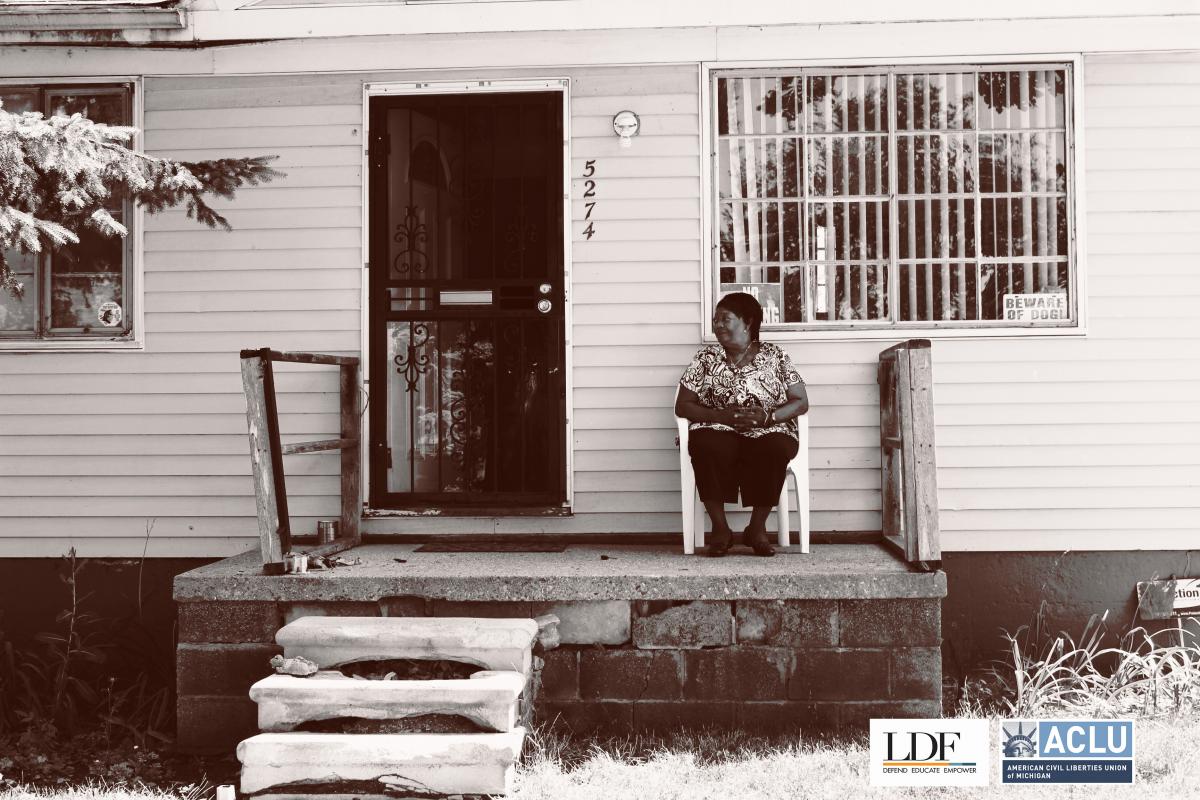 For two decades, Julia Aikens worked to make sure others were cared for.

A medical assistant in a nursing home from 1979 to 1999, Aikens spent the better part of her career looking after the elderly until she herself was forced to go onto disability 17 years ago.

Now, at age 67 and living in an eastside Detroit home she purchased for only $755 in 2014, the soft-spoken grandmother wishes that the city were more diligent about looking after her.

"We need to keep our neighborhoods strong, and that means the city and county have to make sure they're treating homeowners fairly," says Aikens. "I shouldn't have to lose my home because Wayne County is taxing us based on bad assessments by the city."

But these gross overestimations of the value of Aikens' home have put her squarely on the brink of foreclosure. Based on the city's assessment, the "true cash value" of Aikens' home is an estimated $26,122—outrageously disproportionate to what she'd get on the actual real estate market for a home purchased for less than $800 a year ago.

Aikens, whose annual income is about $12,900 from social security and food aid, sought relief under the poverty exemption. However, she was rebuffed by the city because she hadn't lived in her home for more than a year—even though the poverty exemption application doesn't require an applicant to live in a residence for a specified period of time to be eligible for relief.

Although Aikens has been forced into a payment assistance program that demands she pay $50 in back taxes each month—despite the fact that the taxes have been determined by wildly over-inflated estimates—she nevertheless has found herself facing tax foreclosure by the Wayne County Treasurer's Office.

"I'm an elderly woman on a very limited income," she says. "If I qualify for the poverty exemption, then I think the government ought to make sure I get the help it's offering. I thought that was the point of these programs in the first place."

DeAunna Black knows well the vast difference between what city tax assessments claim her house is worth versus what the actual market says. 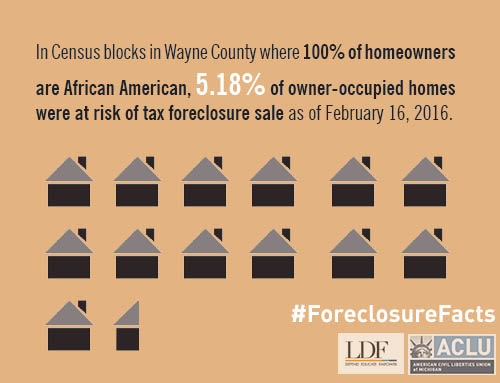 Earlier this year, as her property tax burden mounted, Black tried to sell her home. Based on the assessment the city had done, the house Black shares with her two children was supposed to have a "true cash value" estimate of nearly $37,000.

Even so, she didn't receive a single offer.

But that didn't stop the Wayne County Treasurer from taxing her based on the city's over-inflated assessment. In 2013, Black, who earns about $19,000 a year working in cleaning services despite suffering pain from an auto accident, was hit with a $607 tax bill. In the time since, the bill has grown to $1,136 for unpaid property taxes from 2013 and earlier. 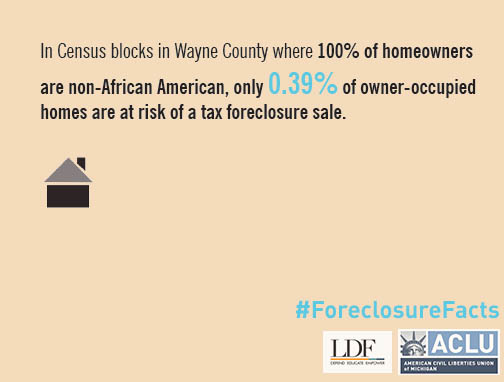 "I was actually excited to buy my own home—until all this happened," she says. "It feels better to own my own home then pay rent and put money in someone else's pockets."

Unable to afford the tax levy, Black—who is expecting her third child in August 2016—is hoping against hope that she can remain rooted in her community.

"I would be in a terrible situation if my home is foreclosed," says Black. "I have two kids and one on the way, so we would be homeless or have to go house to house." 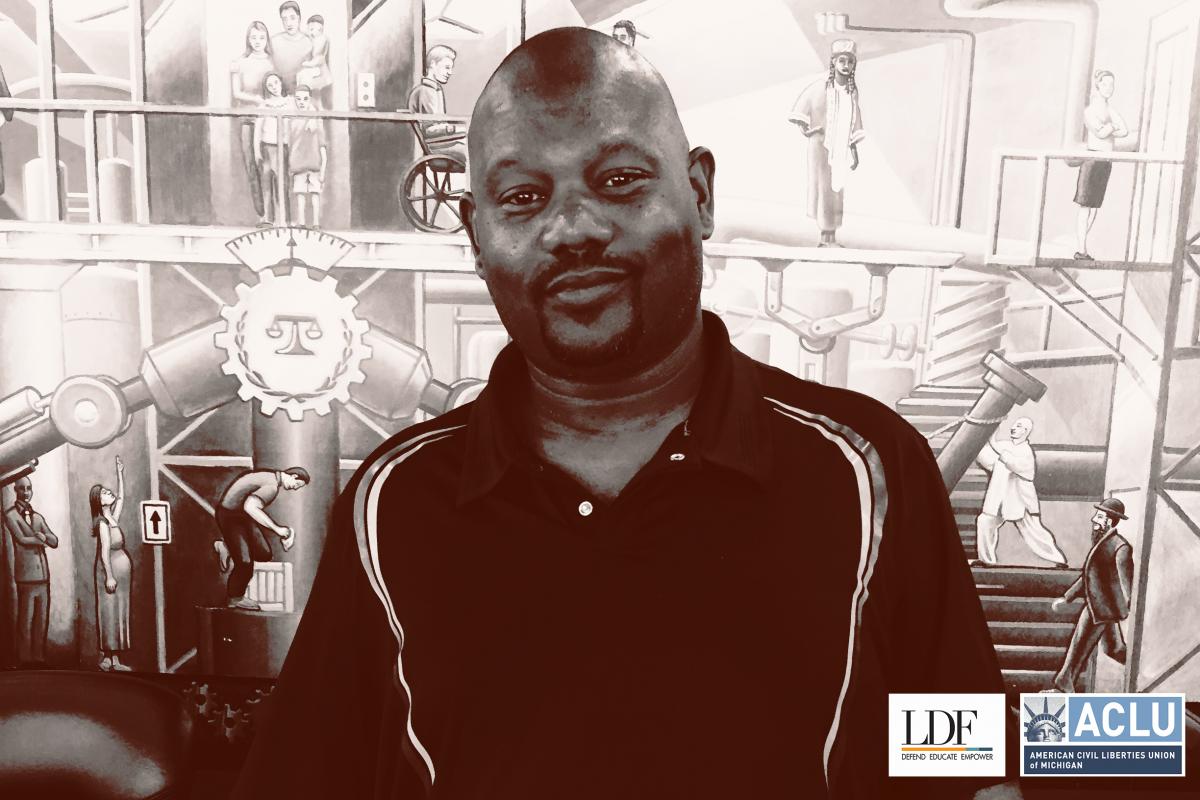 In 2005, Robert Lewis sought to keep legacy alive when he purchased the home in the venerated Russell-Woods Sullivan Historic District that his grandmother had lived in for nearly 20 years.

"I wanted to keep my home in the family," he says, still proud.

But purchasing the home also bought Lewis a slew of headaches as a result of the exorbitant property taxes levied by the Wayne County Treasurer.

One major issue: Even though Lewis owns only one parcel of land, the City of Detroit assigned him two parcel identification numbers for his home. The city also sends the 45-year-old disabled ex-truck driver—whose been forced onto short-term disability multiple times as a result of injuries requiring surgery to his knee, shoulder and neck—a tax bill for each parcel ID.

"I didn't know which to pay or why," laments Lewis. "I'd pay one and I'd get another bill to pay on the other. I got the run around."

Just as bad, the city over-assessed the value of Lewis' home in 2013, claiming it was worth  $47,840 when it was actually worth 17,000. The same year as that assessment, Detroit levied property taxes of $2,736 on Mr. Lewis's home based on the over-assessed State Equalized Value.

Since then, the Detroit native has seen this unfair tax burden swell to $25,571 for unpaid property taxes from tax year 2013 and earlier. The county claims he owes $11,874 in property taxes for one parcel of land and $13,697 for the other.

Wayne County has already informed him of plans to foreclose one of the parcels. Meanwhile, the City of Detroit continues to demand payment for the outstanding balance on the other.

Lewis says that he would like to renovate the home as part of his desire to keep his family's legacy intact. But there's only so much he's willing to invest in the face of threats from the Wayne County Treasurer.

"I want to redo the home," says Lewis, "but not if they're going to take it."