I'm A Juggalo, Not A Gang Member

The American Civil Liberties Union of Michigan, along with the Detroit music duo Insane Clown Posse (ICP), filed a federal lawsuit on behalf of Juggalos, or fans of ICP, claiming that their constitutional rights to expression and association were violated when the U.S. government wrongly and arbitrarily classified the entire fan base as a “hybrid” criminal gang.

The American Civil Liberties Union of Michigan, along with the music duo Insane Clown Posse (ICP), appealed a federal judge’s order dismissing the Juggalos’ case against the Department of Justice and Federal Bureau of Investigation. The lawsuit was originally filed in January on behalf of Juggalos, or fans of ICP, claiming that their constitutional rights to expression and association were violated when the U.S. government wrongly and arbitrarily classified the entire fan base as a “hybrid” criminal gang.

Last week, U.S. District Judge Robert Cleland dismissed the lawsuit claiming that ICP and its fans lack standing -- the legal requirement that forces individuals to prove they were harmed before they can sue. In this case, the judge stated that the Juggalos suffered harm at the hands of local law enforcement agencies and the U.S. Army, not the FBI.

“The only way to remedy this injustice for all innocent Juggalos is to start with the root of the problem – the FBI’s arbitrary and erroneous branding of hundreds of thousands of music fans as gang members,” said Michael J. Steinberg, ACLU of Michigan legal director. “There is no doubt that the FBI created this problem and the solution begins there as well. Otherwise, we’ll be playing whack-o-mole to stop local law enforcement agencies from discriminating against our clients, when the agencies are just following the FBI’s lead.”

The lawsuit was filed on behalf of four Juggalos and the two members of ICP and stems from a 2011 decision by the DOJ to include the fan group in the agency’s third National Gang Threat Assessment officially identifying Juggalos as a “hybrid gang.” As a result of this unjust designation, “individual Juggalos are suffering improper investigations, detentions and other denials of their personal rights at the hands of government officials” or denied employment.

“This is not the end -- we’ll keep fighting to clear the Juggalo family name,” said Joseph Bruce (aka Violent J), a member of ICP. “There has never been—and will never be—a music fan base quite like Juggalos, and while it is easy to fear what one does not understand, discrimination and bigotry against any group of people is just plain wrong and un-American.”
Juggalos are the self-identified fans of ICP.

They often express their affinity for ICP by displaying the “hatchetman” logo and other ICP insignia on their clothing, jewelry, body art and bumper stickers. Juggalos often come together at concerts or their annual week-long summer gathering. They consider themselves a “family” of people who love and help one another and enjoy one another’s company. Juggalos are not an organized fan club, but a group of people who bond over the music and a philosophy of life, much like “Deadheads” bonded around the Grateful Dead. The federal government estimates that there are more than a million Juggalos in the United States.

The ACLU of Michigan and ICP are asking the appeals court to overturn the judge’s order dismissing the case and to order the DOJ to remove the Juggalos from the government’s list of gangs so that the fans of ICP will no longer be unconstitutionally and unjustifiably singled out as targets for scrutiny and harassment by law enforcement authorities throughout the country. The lawsuit goes on to assert that the DOJ’s classification of the Juggalos as a gang is unconstitutionally vague and violates the Juggalos’ constitutional rights to association and speech.

The lawsuit was filed on behalf of four Juggalos and the two members of ICP:

Brandon Bradley felt like an outsider growing up. After a neighbor gave him a copy of ICP’s “The Wraith” CD, Brandon finally felt understood and inspired. He credits ICP’s music and the Juggalo community with having a positive effect on his life, encouraging him to have self-confidence and tolerant of other people’s lifestyles.

Three times, Sacramento police officers have stopped Brandon for minor offenses like jaywalking. Officers interrogated him extensively on his Juggalo tattoos and attire, asking if he is affiliated with a gang and taking detailed notes of his replies. In one instance, gang squad officers forced Brandon to pose for dozens of photos of his clothes, face, and each of his tattoos. In each case, Brandon was let go without a ticket but he believes officers have entered his photos and information into a database of gang members.

After these incidents, Brandon is careful to hide his tattoos and conceal his ICP clothing in certain areas of Sacramento as he is afraid of being stopped by police.

VIDEO: See Brandon and ICP talk about discrimination against Juggalos

Mark Parsons considers himself one of the original fans of ICP, having attended shows and supported the band for years. In honor of the band, Mark named his own trucking company Juggalo Express, LLC and decorated his big rig with the image of a Hatchetman.

While Mark was hauling cargo in a tractor-trailer emblazoned with an ICP logo, he was detained for a safety inspection by a Tennessee State Trooper. When Mark asked why he was stopped, the Trooper replied it was because the logo was associated with a gang “according to the FBI.” This inspection delayed Mark’s cargo for over an hour.

Although Mark takes a lot of pride in the Juggalo community, since the FBI classified music fans like him as a gang, the daily anxiety of being pulled over by law enforcement has cost him both time and money.

Scott Gandy has considered himself a Juggalo since 7th grade. ICP’s music and the supportive community in the fanbase are a large part of Scott’s life. Scott has always aspired to follow family tradition and serve in the U.S. military. However, Army recruiters told Scott that he would have no chance of enlistment because his Juggalo-themed tattoos were classified as gang-affiliated by the FBI. Scott spent over $800 to have his Juggalo tattoos covered with new images, but his application to the military was still denied.

Robert Hellin is a decorated Army specialist who has proudly represented Juggalos in the military. To Robert, being a Juggalo means being tolerant of others and giving back to your community. These are values he uses when acting as a first responder to military aircraft wreckages, disarming the aircraft and rescuing survivors. Robert is slated to be promoted to Sergeant soon, and even had the honor of flying a Hatchetman flag over Afghanistan with the permission of his Unit Captain.

Despite his flawless record and his military unit’s understanding of his identity as a Juggalo, Robert is unsure of his military future. Because the FBI has labeled Juggalos as a hybrid gang, Robert risks discipline or even involuntary discharge from the Army at any time simply for expressing himself.

Insane Clown Posse is an American hip hop duo from Detroit, Michigan. The group is composed of Joseph Bruce and Joseph Utsler, who perform under the respective personas of the "wicked clowns" Violent J and Shaggy 2 Dope. The duo has earned two platinum and five gold albums, with a fan base referred to as Juggalos. 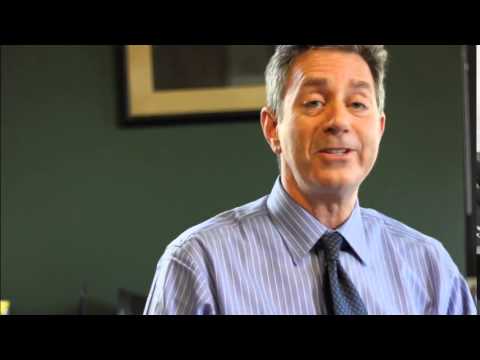 ACLU of Michigan legal director talks about the case 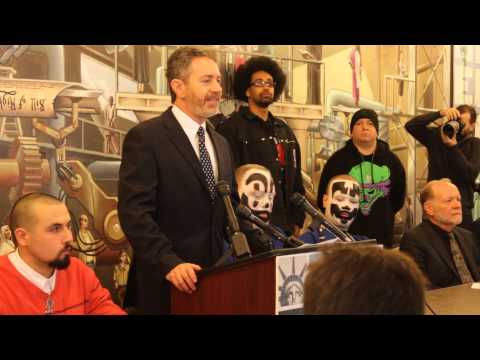 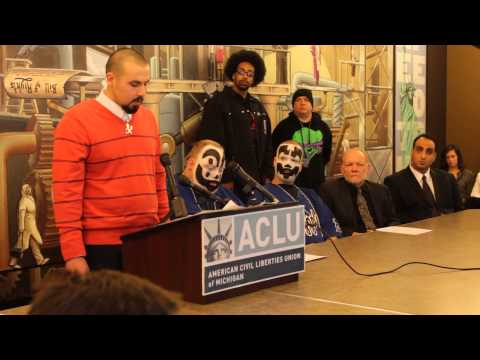 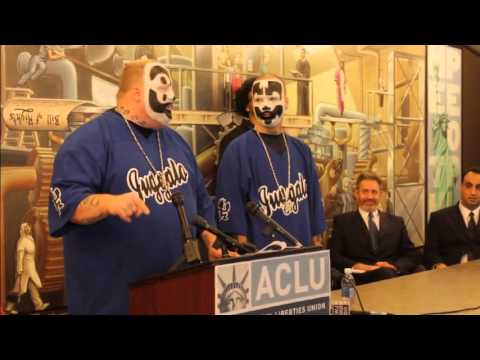 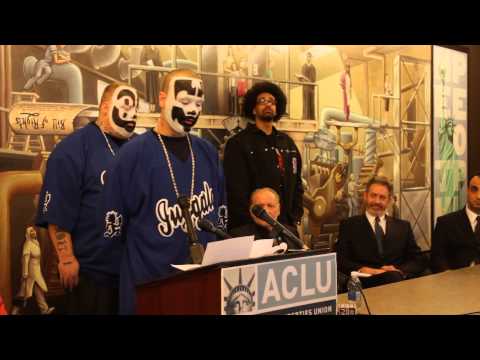 ► Read the ACLU/ICP notice of appeal