A Matter of Life and Death

Following a dispute with a store clerk over a cup of coffee, Milton Hall, a 49-year-old homeless, mentally ill Black man, was confronted in an empty parking lot by eight white Saginaw police officers and a barking, snapping German shepherd. The officers, armed with pistols and assault rifles, stood in a semicircle with their weapons aimed at Mr. Hall, who held a small pen knife. Instead of taking the time to let their confrontation de-escalate, the police unleashed a volley of 46 bullets, firing-squad style.

Eleven rounds hit their target, five of them in the back.

The event, captured on a police car dashcam, made its way online, where it has been viewed more than one million times since Mr. Hall was killed in 2012. Mr. Hall’s mother, Jewel Hall, has tried to watch, but could never bring herself to witness the tragedy in its entirety. 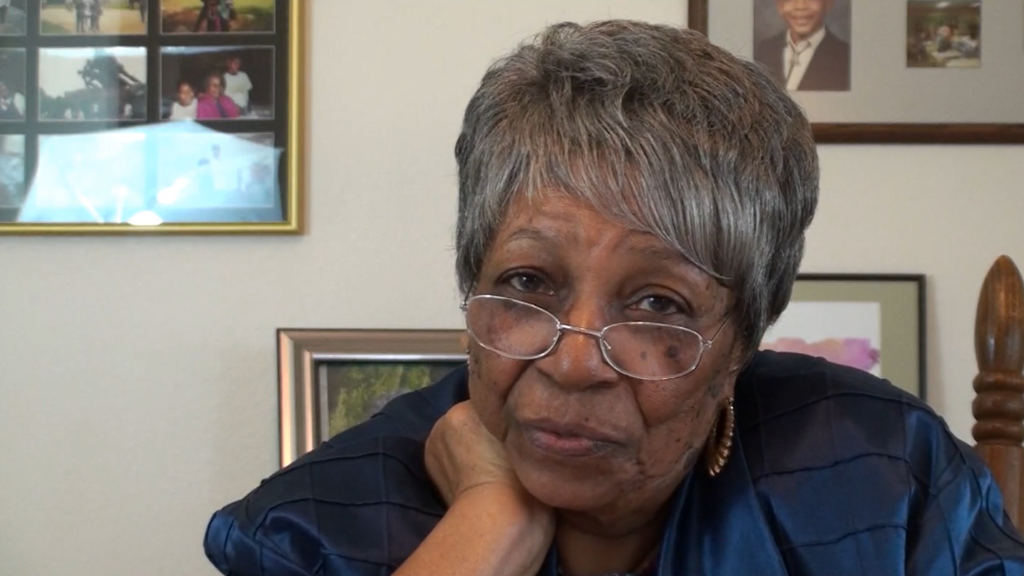 The list of Black mothers who have lost their sons and daughters to police violence is horribly long. Mrs. Jewel Hall's mentally ill son, Milton, was gunned down by eight Saginaw police officers in 2012.

“I can’t fathom any human being doing that to another human being,” she says.

But dehumanization is fundamental to the all-too-familiar accounts of unarmed Black men, women and children being killed by police across the country. Also familiar is the lack of accountability – and justice.

Despite an investigation by the U.S. Department of Justice, no one involved in the killing of Mr. Hall was charged with a crime.

Violent encounters such as that involving Milton Hall capture media headlines, with videos of the incidents often going viral. The most recent example is the horrendous death of George Floyd at the hands of Minneapolis police in May. Video of an officer calmly kneeling on Mr. Floyd’s neck, who cried out repeatedly that he could not breathe until he passed out and died, has sparked protests across the nation.

While these high-profile tragedies can have a galvanizing effect, there is also prevalent in this country the less-obvious terror suffered by countless people of color who, on a daily basis, have racist-driven encounters with police that do not involve physical violence. The experience of Camara Sankofa, an educator, and Shanelle Thomas, a social worker, is typical. The couple drove along Eight Mile Road bordering Detroit on an August evening last year. Mr. Sankofa was behind the wheel of a black 2015 Jeep Cherokee when a traffic stop by Michigan State Police troopers left them deeply shaken. 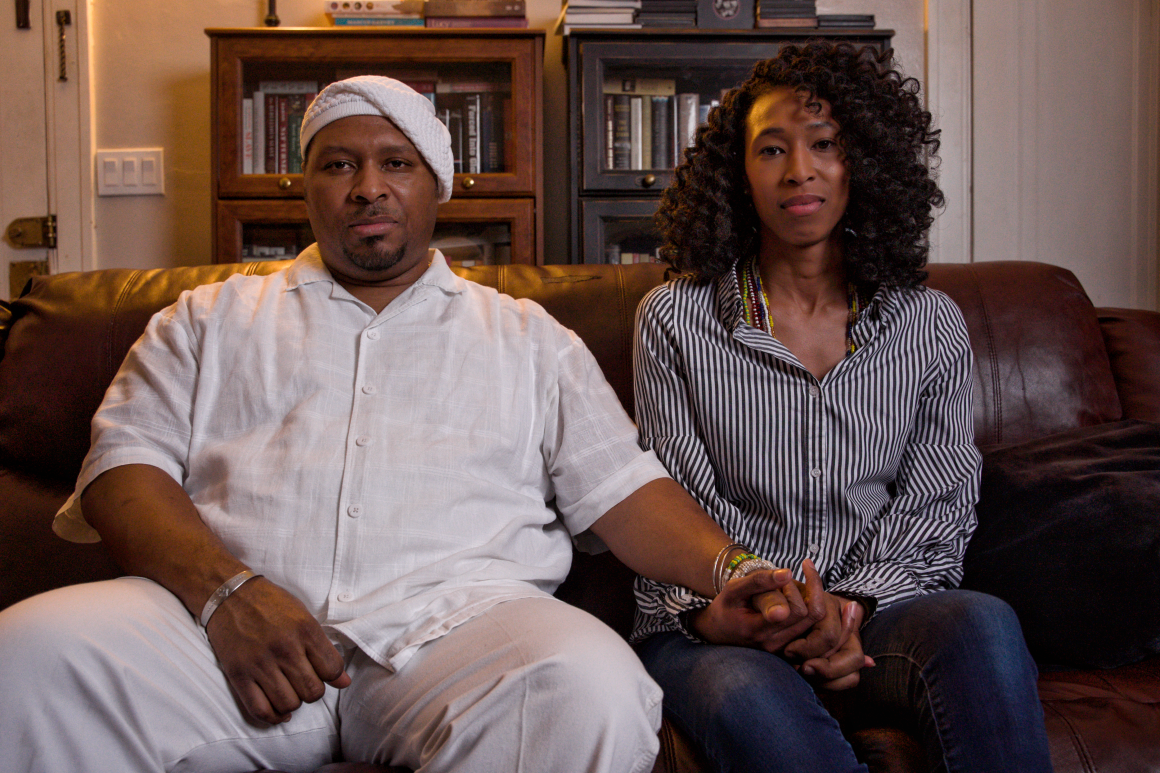 For Camara Sankofa and Shanelle Thomas – like millions of people of color – the looming threat of police racism is an everyday reality. The ACLU of Michigan is working to change that.

At 49, Mr. Sankofa says he’s never been ticketed for a moving violation. There’s good reason for his abundance of caution.

“Being a Black man in America, I know that any encounter with police can cost you your life,” he says.

It’s not that Mr. Sankofa hates law enforcement. A former professional boxer, his love of the sport was nurtured by two Detroit police officers who served as his coaches. And members of his extended family have served on the force. So, he has a deep appreciation of the job’s difficulties and dangers, and understands the vital role good police work plays in fostering a well-functioning society. But he also knows the names Eric Garner, Michael Brown, Philando Castile, Freddie Gray and so many other unarmed Black men killed by police in recent years.

So, he stayed calm when he looked in the rearview mirror and saw the flashing red lights of a Michigan State Police vehicle. He quickly pulled into a parking lot, knowing full well he’d done nothing wrong. As the white officer approached the car, Mr. Sankofa lowered the driver’s side window. 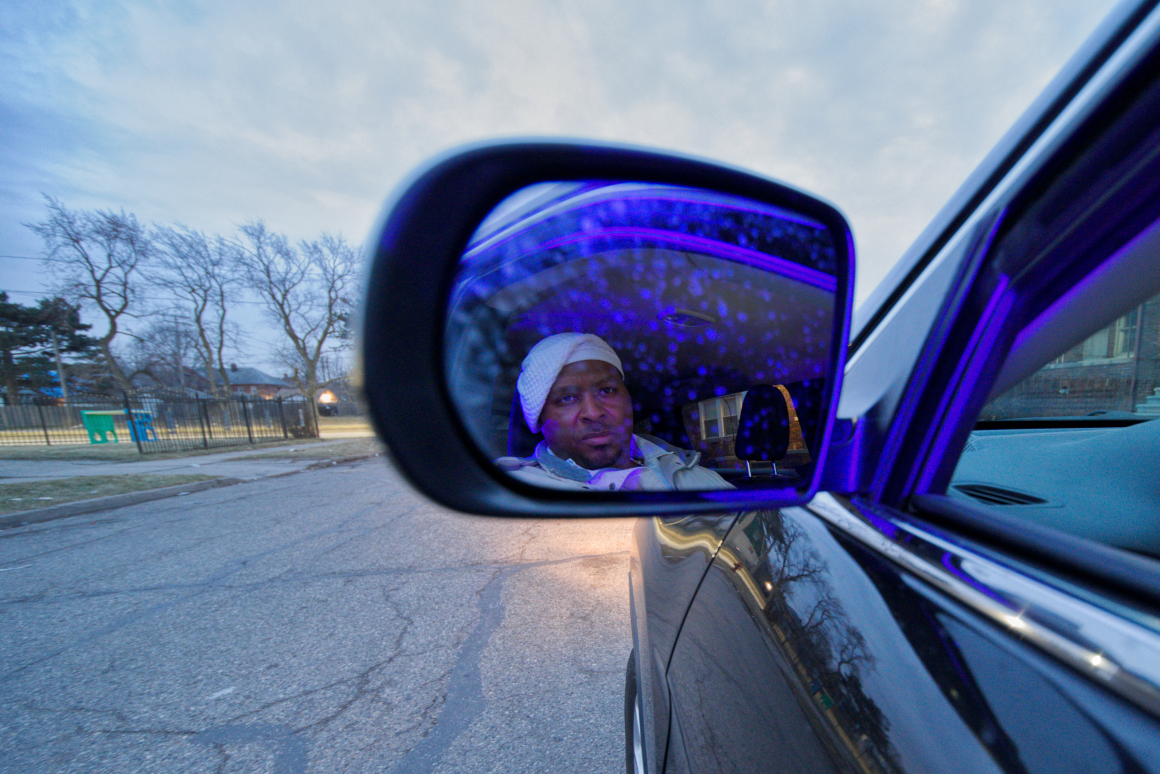 For no apparent reason, Michigan State Police pulled over Camara Sankofa last year, detaining him and his girlfriend for 90 minutes while police dogs were brought in and their vehicle searched. As a result of the trauma, coupled with the long history of authorities inflicting violence on people of color, he says the sight of a police car in the mirror still triggers anxiety attacks.

“The first thing he said to me was, ‘Nice hat,’” recalls Mr. Sankofa, who, for religious reasons, wears a white kufi in public.

Mr. Sankofa remained cooperative, providing the officer with his ID. Ms. Thomas did the same. But they balked when the officer asked permission to search the vehicle. There was zero justification for the request, and no reason for them to submit to the indignity of a baseless search.

The officer responded by calling in one K-9 unit, and then another. The dogs, led around the Jeep separately, left deep scratch marks all over the Jeep. One dog acted in a way its handler said indicated drugs had been detected, allowing a search of the vehicle and all its contents without the couple’s permission.

Although the search came up empty, and the couple was allowed to leave without so much as a ticket, they had been detained for more than 90 minutes, all the while standing in a public place enduring embarrassment and humiliation, not to mention fear.

In the days that followed, Mr. Sankofa called ACLU of Michigan attorney Mark Fancher for advice. The two men know each other from their engagement in Pan-Africanist politics and their shared interest in martial arts.

“I felt my rights had been violated and wanted to know what recourse I might have,” says Mr. Sankofa.

He called the right person.

For the past 14 years, Mr. Fancher has been the staff attorney for the ACLU of Michigan’s Racial Justice Project. It is, he says, “a job that defies easy compartmentalization.” 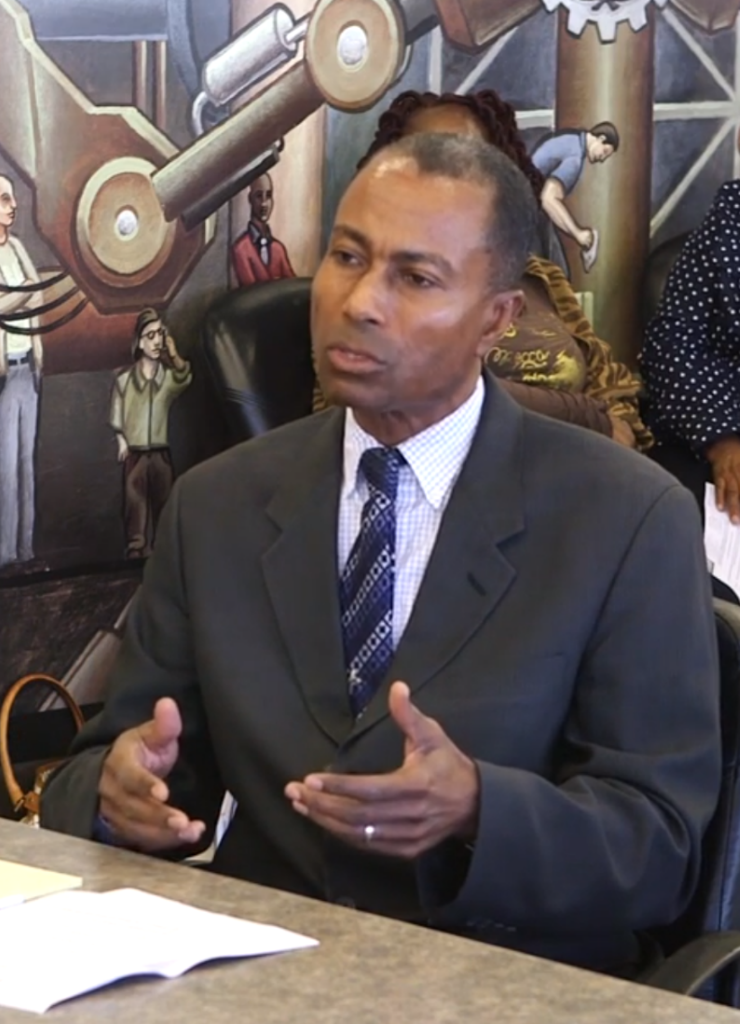 Mark Fancher is staff attorney for the ACLU of Michigan’s Racial Justice Project.

Which is why he’s involved in issues as far-reaching as the fight to stop water shutoffs in Detroit to employment-related discrimination to the use of Native American imagery as public-school mascots. Fighting against a force as ingrained and pervasive as racism can seem an endless task, but he remains certain of eventual success.

“People who are oppressed will never stop fighting as long as they continue to be oppressed,” observes Mr. Fancher. “We don’t have a choice. As long as there is pain, we will keep fighting.”

Which means locking arms with people like Mr. Sankofa and Ms. Thomas.

Mr. Fancher filed a public records request with the Michigan State Police on their behalf, resulting in, among other things, police dashboard camera video of their traffic stop. Mr. Fancher’s efforts, still ongoing, have resulted in a Michigan State Police internal investigation to determine why a couple had to endure prolonged detention and the stress and indignity of having their vehicle searched for no apparent reason.

Along with battling police injustice, Mr. Fancher’s work can also involve lifting up the work of those in law enforcement who are intent on doing the right thing for the communities they are sworn to serve. People like Jeff Hadley, who was part of a panel Mr. Fancher organized to highlight how good policing is and can be done.

When he was hired to be Kalamazoo’s police chief in 2008, Mr. Hadley assumed control of a department that had a strained relationship with the Black community. Mr. Hadley met with a group of Black pastors, who asked the new chief whether people of color were disproportionately targeted for traffic stops.

“They wanted to know if racial profiling was a factor,” says Mr. Hadley. “It was a question that stuck in my mind.” 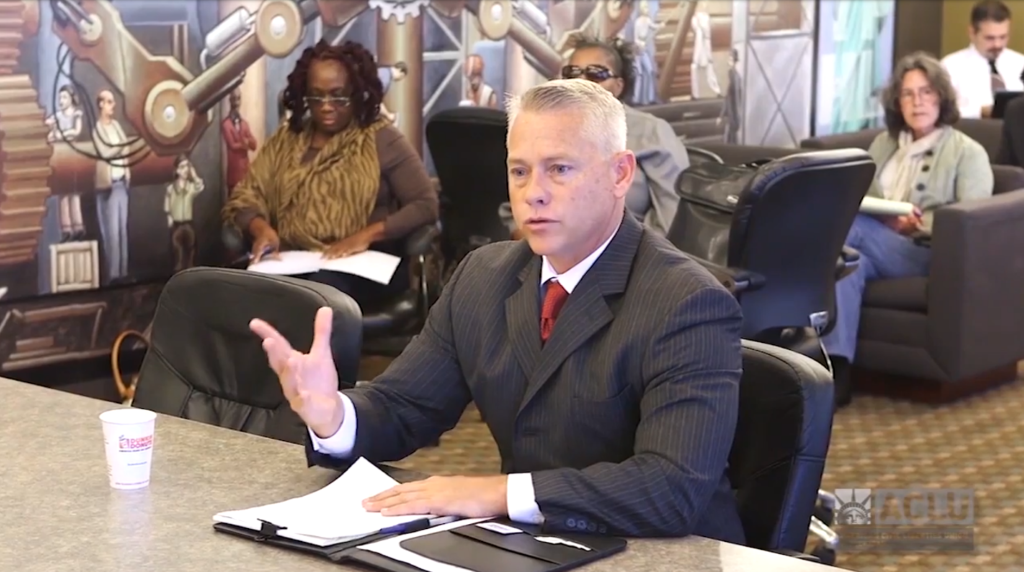 Mr. Hadley, who is white, decided to get a definitive answer. An outside consultant was hired and, beginning in 2012, data was collected over the course of a year at 12 locations throughout the city of nearly 76,000 people.

The study found that Black motorists were 2.32 times more likely to be stopped than non-Black motorists. Black motorists were also handcuffed and arrested more often, but were also less likely to be found carrying contraband like illegal drugs and weapons. When results of the study were made public in September 2013, Mr. Hadley says he heard two responses from the Black community: “One was, ‘You aren’t telling us anything we don’t already know.’ The other was, ‘Thank you for doing this.’”

The reaction from many of his officers was much different.

“By and large, they were very upset,” recalls Mr. Hadley. “They felt like their professionalism was being questioned.”

He responded by trying to take the onus off the officers as individuals, and placing the blame instead on how the department in general dealt with crime. They also looked at training and practices to provide a better understanding overall of the communities being served.

The department also developed a program to train its own recruits, letting them learn the job while earning a paycheck. This innovation was helpful because the expense of attending a police academy had been a barrier to many potential recruits who could broaden the department’s diversity.

“Because of that change we were able to cast a wider net and, as a result, become more diverse,” says Mr. Hadley.

Validation of the department’s reform efforts came a year later, in August 2014, when, in Mr. Hadley’s words, “the lid blew off” Ferguson, Missouri, following a white police officer’s fatal shooting of Michael Brown, an unarmed Black teenager. A federal report issued following that tragedy recommended many measures that had already been implemented in Kalamazoo.

“We were ahead of the curve,” says the chief.

Mr. Hadley is currently chief of the Chatham County, Georgia, police department, and he remains committed to addressing police bias. “Law enforcement has taken it on the chin for a lot of past wrongs. I understand that. Historically, we have been the agents of oppression, and, despite all the effort that has gone into addressing that, we operate in a society where racism, misogyny, homophobia and may other societal ills continue to exist. Dealing with that is a challenge, not just for law enforcement, but for society as a whole.”

That is undeniably true. But, as Mr. Sankofa points out, police are on the front lines of that fight.

The Quiet Terror of Driving While Black

The senseless tragedy of Milton Hall’s killing in Saginaw, and now George Floyd, is clear for all to see. Far more common, though, are the often-invisible wounds inflicted by the kind of traffic stop Mr. Sankofa and Ms. Thomas endured. Mr. Sankofa’s experience prompted a move from the suburb of Oak Park, where the Michigan State Police have a heavy presence, into the city of Detroit. For a while, he stopped wearing his kufi while driving to avoid drawing undue police attention. And he confesses to still experiencing extreme anxiety – the kind that causes your throat to constrict and heart to beat faster – every time he looks in his car mirror and sees a police car following behind.

“At their best, police officers are here to keep peace in our communities, and represent the kind of justice all of us should aspire to,” he says. “But when the police themselves don’t follow the law, then you have a lawless society, and that leads to chaos.”

Join us in the fight for racial justice.