One of the tiniest school districts in the state with 78 total students, Sodus Township District #5 hasn’t so much changed with time as it has gotten swept along in a current that it has often fervently resisted.

Once part of a system that included thousands of small school districts in rural farming communities across the 1,500-square-mile radius of Berrien County, the Sodus district—commonly referred to as “The River School”— is now just one of two remaining single-school districts that carry a number in its name. And although the school itself dates back to the 19th Century, the River School has been holding classes in the same lone building since its construction in 1929.

Sodus Township District #5 passed its first bond—for $1200—in 1906. In the 1900s, many of Michigan’s rural districts were as small as Sodus #5 and easily garnered the support of their small surrounding agricultural communities. Today, however, it is virtually unheard of for a small school district with Sodus’ economic status (median household value was estimated at less than $120,000 in 2013) to pass a bond.

Regardless of size, any school district that wants to build, expand or upgrade facilities must look to taxable property value of residential and commercial property within district boundaries to foot the bill.  While many tiny districts are wealthy and enjoy a high taxable value per pupil, the rural River School’s is not one of them. Its taxable value per pupil ranks 523 out of the state’s 548 districts, meaning that, in this small farming community with no waterfront properties, the tax dollars to upgrade school facilities simply don’t exist.

Although Sodus District #5 is a school of choice that accepts students from throughout Berrien County, the district’s boundaries encompass a mere 2.5 square miles. So even though the district serves students from a larger area as a school of choice, it can tax only the property in the fraction of that area that falls within its district boundaries.

It’s possible that the community could vote to tax local properties to pay for a bond or sinking fund, but such a campaign is unlikely to pass given that any revenues raised under such a measure would be insufficient to improve District #5 facilities anyway. The district currently levies an additional tax to shore up its general fund, but it is to little effect: Most of the 2.5-square-mile taxable area is exempt as agricultural property taxes from local school operating millages.

The district makes due with an annual budget of $60,000 for building, maintenance and other operations expenses. Instructional expenses are paid from another budget. “We pretty much make all repairs out of per-pupil funding or from our own fundraising,” says Velez. The school also looks to its general fund for all capital expenditures, from which a small amount of money is set aside each year to cover major repairs and additions.

The school recently purchased the house next door. Currently, the school uses the land for parking, but is considering constructing a kitchen in the newly acquired building. Says Principal Velez, “We introduced a lunch program, but there is no facility to prepare the food here, so that is contracted out.”

And even before any kitchen is built, there are other issues the district must pay for: updating antiquated lighting (just one light fixture costs around $200 to update), mitigating damage from a recent flood and fixing air conditioning units.

For example, The River School has never been able to purchase busses to transport the students to the school.

In addition to serving as the school’s principal--as well as its maintenance, lunchroom and technical director—Velez says one of his constant challenges is making sure the school stays within state code when upgrades are performed. A smaller building makes the repairs more manageable, but the district still lacks the amenities that larger schools, even in lower income districts can support.

“The problem with staying a small school,” says Velez, “is that the infrastructure requirements are the same as a bigger school…The way things are funded is individually, [per-pupil, with local taxation taking care of facilities]. At the same time, all regulations are universal…Every time there is a rule passed that a larger district is able to implement, we don’t have the personnel or resources to do it.”

Many of the school’s facilities are not up to present day code, but state law allows districts with older buildings to be grandfathered in. “However,” says Velez, “any future expansions and modifications need to go through an approval process…then we have to go through an architect, get a permit, have the state approve it, hire a contractor, and then have the fire inspector come out. These [building code] requirements only effect new additions, so we live with the old ones.”

Living with the old building means that the school is not currently accessible for individuals with disabilities. Grandparents of students often have a difficult time attending school plays, which requires a walk down a set of stairs. “We wish we could make the school more accessible,” says Velez. Yet for The River School, adding accessibility features would be cost-prohibitive in a building from 1929.

“This building was state of the art—for 1929,” quips Velez. He explains that the school could be eligible for historic restoration grants, but these grants require the builder to keep features basically the same. And since school-building codes often conflict with historic preservation parameters, these grants are seldom a practical option for the school district.

With a smaller building, the school is able to get by on it annual $60,000 maintenance and operations budget. While this figure still accounts fo 10% of the district's budget, it does not drastically cut into the school’s instructional expenses.

Principal Velez is constantly seeking to balance variables like building size, number of students, teacher salaries, per-pupil allocation and maintenance costs with the need to ensure that money from the district’s general fund maximizes instructional spending. Adding space means adding maintenance costs, which is another reason why Velez hesitates to construct a kitchen, although, in the long run, preparing meals in-house could save the school money.

The space of the school as it is will not allow for much more than 75 students, so an increase in revenue is unlikely any time soon. The school’s lunch room, main office, library and auditorium are all housed in the same multi-purpose room. And the school’s special-education classroom is housed on the stage. Each time the school hosts a production, the staff must take down and re-assemble the classroom.

Velez says the district must constantly temper aesthetics with efficiency—“you want the learning environment to flow, so you feel it’s nice when you walk in”—but plaster walls make it virtually impossible to make technical upgrades without stringing cumbersome wires along the outsides of walls and ceilings.

In 1997, the building’s roof was redone, and the school added air conditioning units, which effectively force air through vents in the ceiling. “However, they could have easily converted our steam heating to forced-air units as well,” explains Velez. “This would have saved us money and made heating more efficient.”

Velez did not know why the previous building administrator chose to forego the additional operation, though he suspects budget limitations played a role. Across Michigan, small and large school districts alike must make decisions that favor short-term budgetary constraints over long-term benefits.

Air conditioning in hot, rural southwestern Michigan is a necessity. But now, one of the three circa-1997 air conditioning units is broken. Its repair has been slow coming because it costs extra to fix this unit—since it is located on the roof, the school would need to rent a forklift to complete the unit replacement.

The demands of keeping up the building seem endless. When the district updated lighting equipment in 2000, the school fundraised, and was able to afford to hire a master electrician. Parent volunteers pitched in to help with the work.

“We had parents drilling holes, running wire, so we could afford to make the updates,” says Velez. “We were lucky, but we can’t always count on that.”

Unfortunately, the state's current capex funding rules mean Velez can’t count on much else in the way of outside aid either.

And therein lies the problem. 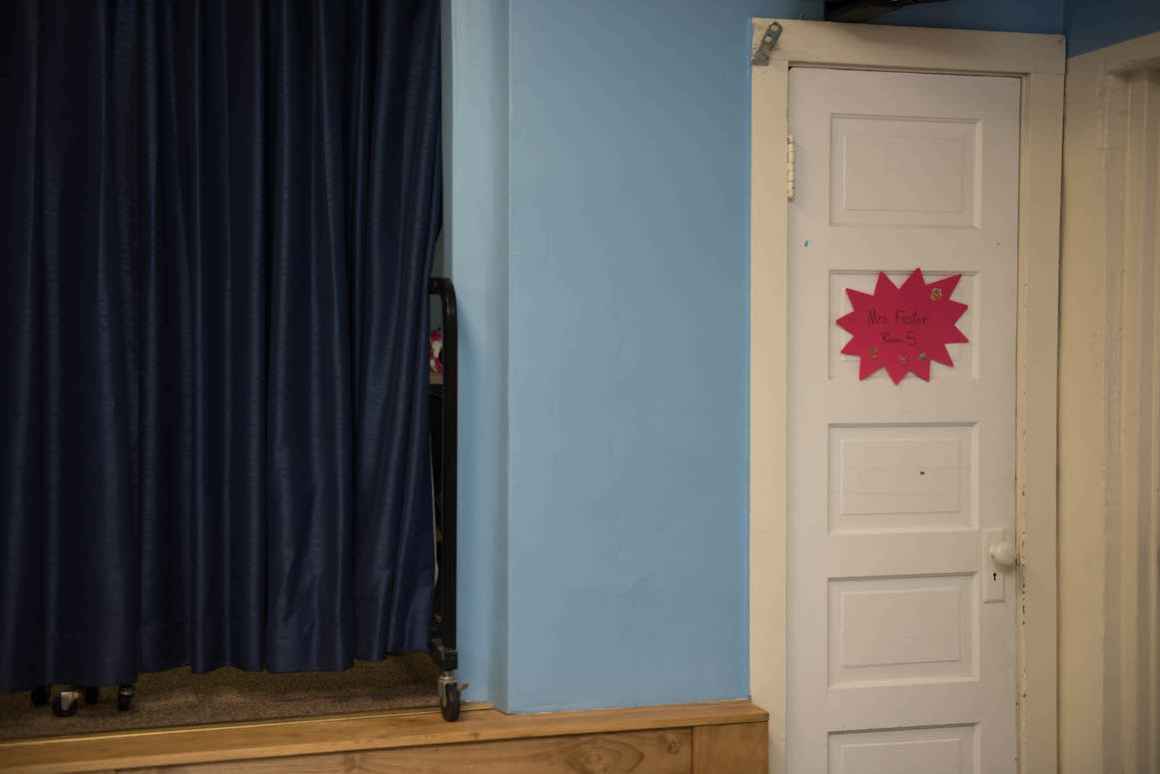 Special-education classes at the Sodus school are conducted on the school's stage, in a large multi-use room. Whenever students put on a school production, the classroom must be dismantled and reassembled.