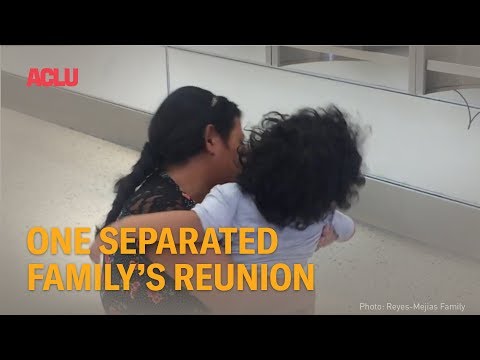 In May 2018 Attorney General Jeff Sessions announced a new “zero tolerance” immigration policy that resulted in the forced separation of thousands of young children from their families when they crossed the border. The ACLU filed a federal lawsuit to stop family separation, and in June 2018 a federal judge issued a nationwide injunction, ordering the government to reunite all children with their parents.

Three fathers from Central America who were separated from their toddlers at the Texas border after seeking asylum in the United States were transferred to Michigan to reunite with their children. One of the fathers had been sleeping on the floor of a cell alongside his three-year-old son in a Texas detention center when he was awakened and told to leave the cell for processing; he did not see his son again for three months.

In July 2018, the ACLU of Michigan represented two of the fathers in the reunification process and immigration court proceedings. They were reunited with their respective three-year-old sons and are now living with relatives in other states.

ACLU Applauds Michigan Lawmaker for Introduction of Bills to Allow...