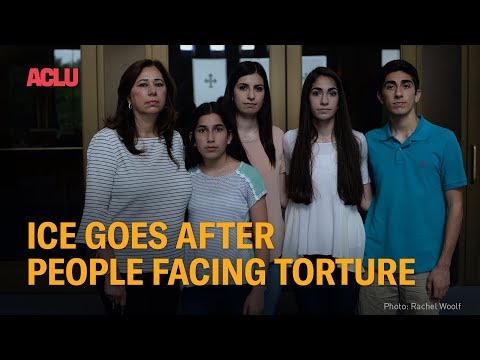 The Sixth Circuit denied our request for the full Court of Appeals to hear the case.  This means that on April 23, 2020 Judge Goldsmith’s order preventing the redetention of Hamama class members will go away. How this will affect you depends on your individual immigration case. Read the explainer attached below and talk to your immigration attorney to find out what this means for you.  A video with attorneys from the Hamama litigation team is coming soon, so check back for more info.

The ACLU sued Immigration and Customs Enforcement in June 2017 on behalf of Iraqi residents and their families in the U.S., after ICE agents arrested more than 100 Iraqi nationals without warning — including many who came to the U.S. as children and who’ve lived in the U.S. for decades — in raids throughout Metro Detroit. In 2017 hundreds of Iraqis in Michigan and throughout the country were arrested by Immigration and Customs Enforcement (ICE), which intended to deport them immediately to Iraq. Most have been living in the United States for decades, but were previously ordered deported, either for technical immigration violations or for past convictions. Because the Iraqi government had long refused to issue travel documents for potential deportees, the United States has been unable to deport them. But when Iraq agreed to accept some U.S. deportees, suddenly all 1400 Iraqis with an old deportation order were targets.

The ACLU filed a class action lawsuit in federal court to stop the deportations on the grounds that they would likely result in persecution, torture or death for those deported. In 2017 Judge Mark Goldsmith issued a preliminary injunction barring deportation of Iraqis while they access the immigration court system, giving them time to file motions to reopen their immigration cases based on the changed country conditions or legal developments in the decades since their cases were decided. In this class-action lawsuit, Hamama v. Adducci, we argued that if returned to Iraq, these people face persecution, torture or death, and that it is illegal to deport the detainees without giving them an opportunity to present their claims to an immigration judge. Nationwide, some 1400 Iraqis with old removal orders are affected by the case. More than 350 of them have been detained during the case.

On July 24, 2017, a federal court granted the ACLU's request for a nationwide preliminary injunction; the court stayed the removal of all Iraqi nationals in the U.S. who had final orders of removal on June 24, 2017 and who have been, or will be, detained by ICE. The injunction gave class members three months to file a motion to reopen in the immigration courts, so that their cases could be decided on an individual basis. The three month period started when the government provided class members with copies of their immigration files and records that are necessary to properly litigate relief in immigration court. The stay of deportation continues while the individual’s immigration case works its way through the immigration court system, including the appeals process.

In November 2017, when ICE continued to detain many class members without bond hearings while they fight their immigration cases, the ACLU filed a second preliminary injunction motion arguing that the Constitution forbids detention without an individualized bond hearing to determine if detention is necessary. On January 2, 2018, U.S. District Court Judge Mark Goldsmith held that the detainees should receive individualized bond hearings, explaining that “our legal tradition rejects warehousing human beings while their legal rights are being determined, without an opportunity to persuade a judge that the norm of monitored freedom should be followed.” Most of those bond hearings have now been held, and about half of the detainees have returned home. However, many detainees remain unjustly incarcerated.

The government appealed both the U.S. District Court’s order staying removal to Iraq and the order prohibiting prolonged detention without a bond hearing.

Subsequent orders in 2018 required the government to provide Iraqis with bond hearings and release those who had been detained longer than six months, freeing hundreds of people from detention.  But the government appealed, and in decisions in December 2018 and January 2020 the Sixth Circuit reversed, each time by a vote of 2-1. In June 2018, the ACLU of Michigan filed an emergency motion to protect Iraqis detained by ICE from illegal coercion and intimidation. ICE had been threatening our vulnerable clients with criminal prosecution for refusing to say they want to go to Iraq. Judge Goldsmith granted immediate relief to the Iraqi detainees, prohibiting ICE from harassing the long-time U.S. residents into agreeing to be deported.

In August 2018, we asked the U.S. District Court to release the more than 100 Iraqi nationals who remain illegally detained by U.S. immigration authorities, most for more than a year. The ACLU also requested sanctions against ICE for misleading the court, and asked to unseal secret documents that show ICE’s prior statements to the court were false.

In October 2018, Judge Goldsmith ordered the secret documents released. The formerly sealed evidence shows that ICE had been lying, and that the Iraqi detainees are unlikely to be removed from the United States. These falsehoods are the reason the Iraqis remain locked up: the Constitution and federal law prohibit prolonged detention when removal is not significantly likely.

Then victory in November 2018: Judge Goldsmith ordered ICE to release the detained Iraqis within 30 days, and wrote that he will impose sanctions on the Government for "failing to comply with court orders, submitting demonstrably false declarations of Government officials, and otherwise violating its litigation obligations—all of which impels this Court to impose sanctions."

Late December 2018, this victory was followed by a disappointing ruling from the U.S. Court of Appeals for the Sixth Circuit, stating that a lower court was powerless to stop the deportation of Iraqi nationals, even those deported who face persecution, torture or death. The majority also ruled that the district court did not have jurisdiction to grant bond hearings on a class-wide basis. This ruling reversed the order preventing clients' removals and requiring bond hearings.

The ACLU continues to fight to protect its Iraqi clients, many of whom were able to hug their children and loved ones for the first time in 18 months, after being released from unjust detention in December 2018. The latest ruling from the Sixth Circuit does not change the fact that during the past year and a half, hundreds of clients have been able to present their cases before immigration judges, rather than being suddenly deported without a hearing, and to a country where they are in paramount danger.

Despite the legal setbacks in the Sixth Circuit, the case has allowed hundreds of Iraqis to access the immigration court system, as well as to fight their immigration case from home, rather than in detention. Many are winning their immigration cases, and some have even become citizens. But a few have been deported, and one of our clients, Jimmy Al Dauod, died in Iraq.  The case is now back before the district court on remand.

In addition to lawyers from the ACLU of Michigan and the National ACLU, the case is being litigated by the law firm of Miller Canfield, Michigan Law Professor Margo Schlanger, the Michigan Immigrant Rights Center, CODE Legal Aid, the International Refugee Assistance Project, and other ACLU cooperating attorneys.

WATCH THE DOCUMENTARY, THE SINKHOLE

The Sinkhole tells the story of an Iraqi grandfather's disappearance into immigration detention and the simultaneous emergence of a sinkhole in the suburbs of Detroit.

The Drive to Thrive