Know Your Rights When You Protest

The right to protest and express your opinions is one of the most basic and important rights in the United States. Protests play an important role in preserving democracy by raising awareness and bringing about change. Recognizing the historical and central importance of protests and demonstrations, the First Amendment of the U.S. Constitution protects your right to protest, assemble, and petition.

Print out this pocket guide so you know your rights when protesting in Michigan. Also available in: 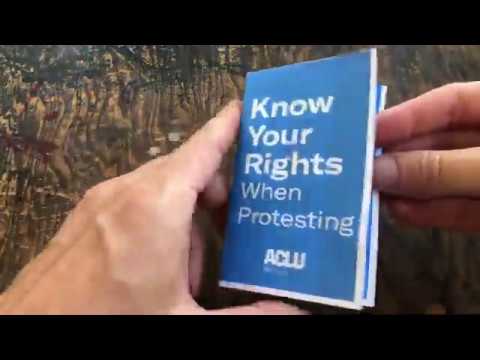 The right to join with fellow citizens in protest or peaceful assembly is critical to a functioning democracy. But it is also true that governments and police can violate this right – through the use of mass arrests, illegal use of force, criminalization of protest, and other means intended to thwart free public expression.

Standing up for your right to protest can be challenging, especially when demonstrations are met with violence. Knowing your rights is the most powerful weapon you have against police abuse. Read on to learn what you need to know before heading out to exercise your constitutionally protected right to protest.

What are my rights if I choose to organize or attend a protest?

A.What are my rights if I choose to organize or attend a protest?

· Your rights are strongest in public forums like streets, sidewalks, and in front of government buildings, as long as you are not blocking access or interfering with operations.

· The government may not restrict your speech on private property if you are protesting with consent of the property owner.

· Protesters and counter-protesters have the right to free speech, and police must treat both groups equally.

· Counter-demonstrators do not have a right to physically disrupt the event or drown out the speakers they are protesting. They do have the right to be present and to voice their displeasure within the vicinity of the demonstrators.

· No permit is necessary to march on public sidewalks, as long as car and pedestrian traffic is not obstructed.

· If you do not have a permit, police may ask you to move to the side of a sidewalk to let others pass or for other safety reasons.

What if police order protesters to disperse?

· Shutting down a protest through a dispersal order must be law enforcement’s last resort.

· Police may not disperse a protest unless there is a clear danger of a riot, disorder, interference with traffic, or other immediate threat to public safety.

· If officers issue an order to disperse, they must give reasonable opportunity to comply, including sufficient time and a clear exit path.

· Protesters must receive a clear and detailed notice of a dispersal order, including how much time they have to disperse, consequences for failing to disperse, and what exit route they can follow before they may be arrested or charged with any crime.

What if I want to take pictures or shoot video at a protest?

A.What if I want to take pictures or shoot video at a protest?

· When lawfully present in any public space, you have the right to photograph anything in plain view, including federal buildings and police.

· On private property, the property owner may set rules about photography and video.

· Police may not confiscate or demand to view photographs or video without a warrant. They cannot delete data under any circumstances.

· Police may order citizens to cease activities, including recording, that are truly interfering with legitimate law enforcement operations, but video recording from a safe distance is not interfering.

What if I am stopped or detained by police?

A.What if I am stopped or detained by police?

· Stay calm and keep your hands visible. Don’t argue, resist or obstruct police, even if you think they are violating your rights.

· Ask if you are free to leave. If the officer says yes, calmly walk away.

· You do not have to show ID if police demand it unless you are under arrest, being ticketed, or driving. You also have to identify yourself to police if (1) the police officers have reasonable suspicion to believe you violated the law and (2) there is a local law requiring that you show ID when the police have reasonable suspicion (as exists in Ann Arbor and East Lansing).

· If you get arrested, don't say anything. Ask for a lawyer immediately. Do not sign anything and do not agree to anything without an attorney present. Demand your right to a local phone call. If you call a lawyer for legal advice, law enforcement is not allowed to listen.

· You never have to consent to a search of yourself or your belongings. If you do explicitly consent, it may affect you later in court. · You have the right to make a local phone call, and police are not permitted to listen if you are speaking with your lawyer.

· Police may “pat down” your clothing only if they suspect you have a weapon and may search you after an arrest.

What if I believe my rights have been violated?

A.What if I believe my rights have been violated?

· When you can, write down everything that you remember, including the officers’ name, badge and patrol car numbers and the agency they work for.

· Take photographs of any injuries.

· Once you have all of this information, you can file a written complaint with the agency’s internal affairs division or a civilian complaint board.

Freedom of the Press is Under Attack