As Visibility for Trans People Increases, So Does Fear

It’s no secret that transgender people are becoming more visible on a national stage. There’s actress Laverne Cox, reality star Caitlyn Jenner, and even shows like "Transparent" that try with honest intentions to shine some much-needed light on the issues that affect the trans community the most. These are all good things, of course.

But as visibility increases, so does fear—in the form of anti-trans bathroom bills, anti-gay laws and political pushback against policies that would help transgender individuals.

Consider the Michigan State Board of Education’s recently released Guidance on Safe and Supportive Learning Environments for Lesbian, Gay, Bisexual, Transgender, and Questioning (LGBTQ) Students—a well-researched, comprehensive guide of best policy practices designed to provide an enriching environment where all students will feel safe and respected.

Leave a comment on the State Board of Education website in support of its policy guidance to give LGBTQ students a safe and supportive learning environment.

We know these guidelines work. In fact, they are based on schools that have used similar guidelines. And when they are in place, LGBTQ student achievement rises; students have fewer absences; violence, harassment and bullying aimed at transgender and gender non-conforming people becomes less frequent; and—of great significance—suicide attempts by transgender students fall dramatically.

But some people are hell-bent on ensuring that school districts don’t even consider these guidelines. It’s important to note that the State Board of Education’s recommended guidelines are just that: recommendations. They aren’t mandates, but rather measures provided in response to repeated calls from Michigan educators and school districts about how to effectively support LGBTQ students. 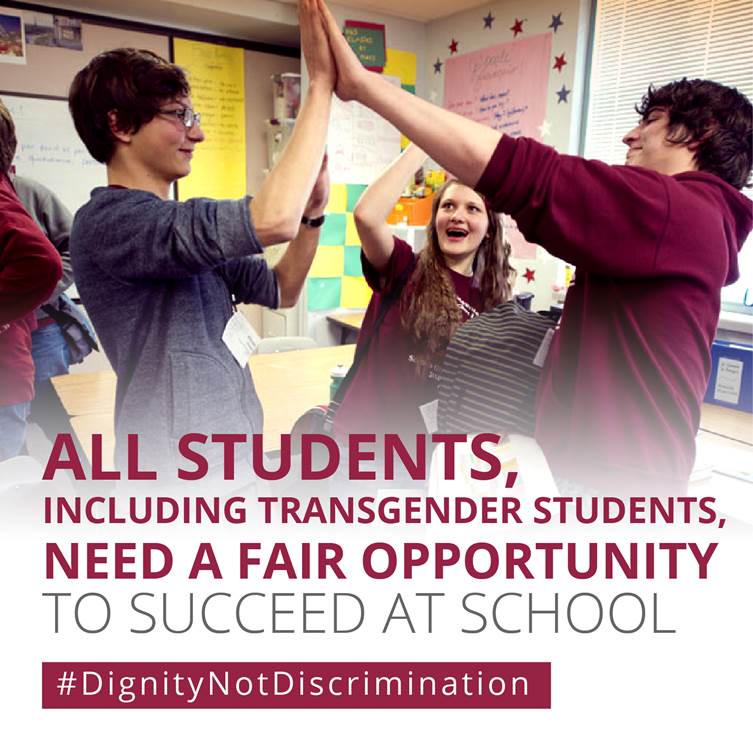 The State Board's proposed guidelines would only strengthen our kids’ learning environment. School districts would be taking an unnecessary risk by not having policies in place to safeguard a healthy learning environment for LGBTQ students, which could expose schools to lawsuits and the possibility of losing millions of dollars in federal education funding.

This brings us back to fear.

Fear is easily fabricated from the ongoing misconceptions that transgender people—particularly transgender women—are predators who are really "up to something" when they use the bathroom or check into a hotel. The latest trend in this fear-mongering has been to direct such suspicion at transgender students.

There has been a veritable tsunami of anti-trans student legislation proposed at the state-level this year. According to the National Center for Transgender Equality’s calculations, there have been more than 40 pieces of this type of legislation proposed so far in 2016, much of it aimed at preventing students from using the restroom that is suitable for their gender identity. In Michigan, we're expecting an anti-trans bathroom bill from Sen. Tom Casperson. And currently, there are at least seven more states considering this kind of legislation.

I suggest we all step back for a moment, and do some soul searching. Think about what this type of hyper-fearful climate would do to your sense of self if you were a young transgender kid in school. Consider how you would cope.

It’s time to become educated about these fears so we can create safe and supportive places for kids—all of our kids—to learn.