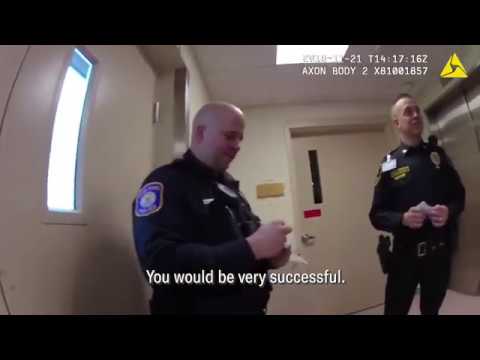 New Police Video and Records Show GRPD Knew Ramos-Gomez Was a U.S. Citizen Before Turning Him Over to ICE; GRPD Officer Violates Police Policy By Drawing Gun On Teens

The American Civil Liberties Union of Michigan (ACLU) and the Michigan Immigrant Rights Center (MIRC) have filed complaints with the Michigan Department of Civil Rights (MDCR) regarding the Grand Rapids Police Department’s (GRPD) racially discriminatory treatment of U.S. citizen and decorated Marine combat veteran Jilmar Ramos-Gomez, and a 15-year old of Mexican descent, who was walking in the street with a friend March 11, 2019, when a GRPD officer stopped them, and then drew a gun on the unarmed teens.

“The Grand Rapids police cannot be trusted to police itself, which is why we are filing today’s civil rights complaints,” said ACLU attorney Miriam Aukerman.  “Whether the GRPD is calling ICE on a US citizen or drawing a gun on a kid who is jaywalking, what both of these incidents show is that the GRPD treats people of color in ways white people do not have to endure, and then fails to hold itself accountable.  There must be an independent investigation.”

The ACLU and MIRC filed a complaint on behalf of Mr. Ramos-Gomez for the discriminatory treatment by GRPD police Captain Curt VanderKooi, who called U.S. Immigration and Customs Enforcement (ICE) on Mr. Ramos-Gomez on November 21, 2018, even though he was carrying his passport and other identification proving he is an American citizen.  The ACLU and MIRC obtained video and documents from the GRPD through the Freedom of Information Act regarding the arrest of Mr. Ramos-Gomez.  The video shows that the GRPD knew Mr. Ramos-Gomez was an American citizen with PTSD. The records show how the recently exonerated and reinstated GRPD Captain VanderKooi routinely contacted ICE about victims of crimes and people held in police custody, despite his claim that he asked ICE to check Mr. Ramos-Gomez’s status only because of concerns about potential terrorism.

“Despite police body camera video recordings and hundreds of pages of records showing that GRPD police Captain VanderKooi violated police policies when he turned Mr. Ramos-Gomez over to ICE and tried to turn over others, he is not only exonerated but reinstated, without sufficient protections that he won’t do so again,” said MIRC attorney Hillary Scholten.  “This is an outrageous breach of trust that once again damages the police department’s credibility with the community.”

The ACLU also filed a complaint with the MDCR for the discriminatory treatment by the GRPD of a 15-year old Latino youth. Specifically, on March 11, 2019, Officer Austin Diekevers stopped the teen and his friend when walking in Lynch Street and ordered the teens to get out of the road, which they did. Officer Diekevers approached the teens with his hand on his holstered gun, and insisted that the teens could not leave, and had to put their hands on their heads while he checked if they had warrants. Without giving time to comply, the officer grabbed the teen. The teen pulled away from the officer's grip, while insisting he and his friend had done nothing wrong. The officer then drew his gun and pointed it at the teens shouting at them to get on the ground.

Officer Diekevers’ treatment of these teens violates the GRPD’s own Youth Interaction Policy, which requires officers to take age into account when interacting with youth, recognizing that “youth characteristically lack the capacity to exercise mature judgment and possess an incomplete ability to understand the world around them.”  Among the factors officers must consider are the nature of the complaint or contact, and the subject’s cooperation. In this case, the teens were jaywalking and immediately went to the sidewalk when Officer Diekevers asked.

Finally, the Youth Interaction Policy also specifically provides that “Officers shall not draw and display a firearm on a youth unless the officer has a fear for the safety of the officer or the safety of others.” Nothing in the video shows any action by either youth that justified the officer drawing his gun. Officer Diekevers, needlessly chose to escalate the situation.

The ACLU also has filed a complaint with GRPD’s Internal Affairs (IA) unit regarding the treatment of the Latino teen.

ACLU of Michigan and Michigan Immigration Rights Center Respond to...

Is All of Michigan a Warrantless Border Zone?