Another busy week at the ACLU of Michigan. Even during one of the snowiest Februarys on record, our offices in Detroit, Lansing and Grand Rapids are buzzing with work on issues important to you. This week we're supporting teens in crisis, fighting for second-parent adoption, and asking ourselves: is being broke a crime?

Movie buffs and civil liberties fans alike, don't forget time is running out catch one of the films at the Kalamazoo Civil Liberties Film Fest. Films run through March 25 and come with a delicious Indian dinner.

Should Welfare Recipients Be Drug Tested?
Should people who fall on hard times and need help be treated with suspicion?

Our legal director, Michael Steinberg doesn't have to think twice.

"It's not a crime to be poor and welfare recipients shouldn't be treated like they're criminals," he says in an article on Michigan's policy requiring random drug testing as a condition of receiving welfare (link).

This policy is part of a disturbing trend — criminal punishment of Michiganders because they are poor.

Read our Poverty Docket for more cases where we're defending people who are being thrown in jail, kept in jail or convicted for being broke.

School Counselors Should Offer Support, Not Discrimination
Between the Lines covers our recent actions in support of Eastern Michigan University's removal of a counseling student for refusing to work with LGBT clients in their latest issue (link).

The ACLU supports the free expression of strongly held beliefs. However, in this case the student refused to comply with an essential part of the counseling program: maintaining a professional relationship without imposing personal beliefs on clients.

"There is no place for discrimination when counseling people in need," says our executive director Kary Moss.

In an article for the Michigan Messenger, Todd Heywood discusses possible stumbling blocks for new legislation in Michigan that would recognize such families (link).

In the article, our LGBT Project staff attorney Jay Kaplan reaffirms our commitment to fight any attempt to block the legislation and "deny children of LGBT parents the same right to legal protection of two parents through adoption."

The Department of Justice will no longer defend DOMA in court, as the administration admits that the Act is unconstitutionally vague.

This decision impacts marriage equality cases around the country, including that of ACLU client Edie Windsor.

When Edie's long-term partner died, the federal government refused to recognize their marriage and taxed Edie's inheritance as though she had been a stranger.

In the video below, Edie herself is optimistic about how this decision will advance marriage equality in America. 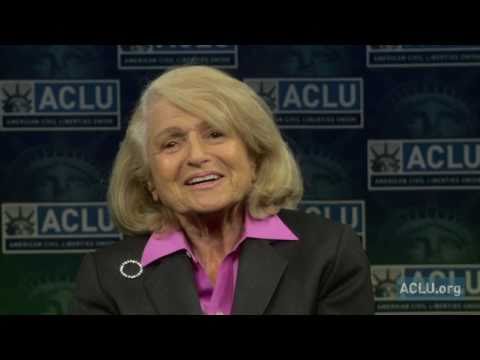