On rainy days, the roof that covers the lone building that makes up Rudyard Area Schools might as well be a sieve.

Water pours through so heavily that teachers must constantly re-arrange desks around the leaky areas, wet floors severely limiting the number of seat-configurations they can arrange for group work. One elementary teacher says her classroom is so water-logged that she describes it as “six-bucket” room, after the number of containers she has to set down to catch all the invasive rainwater.  Bill Goetz, another elementary instructor, says the leaks are so bad that tending to them eats into instructional time.

“I have to mop the floor every 15 minutes,” he explains.

And not only does this building house all of the more than 700 K-12 students in the district, but it also contains the district’s administrative offices.

Still, for all the building’s importance to the district, it continues to fall apart—and there’s little to nothing that administrators in the district can do about it.

Ranking 446 out of 548 districts in total taxable value per pupil, Rudyard offers a sad yet striking example of how the state’s restrictive rules on capital-improvement expenditures have left school districts throughout Michigan struggling to stay above water.

And in the case of the rain-wracked Rudyard district, this struggle can be as literal as it is figurative.

Rudyard’s struggles are due partly to the sparse population of Rudyard Township (1,370 people, according to the 2010 U.S.. Census), partly to the district’s geographic location. With virtually no access to the abundant tax dollars generated by the scores of waterfront property that sit near—but not within—the district, Rudyard lacks the ability to make the sort of capital improvements other districts take for granted.

“We’re landlocked,” says Goetz. “We have all these districts around us who have tax bases with second homes on their beach front.”

Geography means Rudyard struggles to raise money to maintain its facilities. Voters have shot down the two most recent bond measures. But even if the district could lobby the local tax base successfully to pass a bond or a sinking fund, it would still be taxing a community where the median home value is barely above $90,000. In the Upper Peninsula, this predicament is typical for areas without shoreline properties,

Quite the opposite is true for areas where plush vacation homes and resorts line the Great Lakes’ waterfronts. Because second homes carry no property-tax exemptions, those residences can act like a fiscal steroid for the districts fortunate enough to contain them. (Primary residences carry some exemptions for property taxes, namely for school operations millages.)

Consider the city of Harbor Springs, which is about a 90-minute drive south of Rudyard. Set atop sweeping cliffs that overlook Lake Michigan, in close proximity to destinations such as Traverse City and Petoskey, Harbor Springs educates roughly the same number of students as Rudyard—about 800.

Harbor Springs, however, boasts two elementary schools, one middle school and one high school, all newly renovated, and all housed in separate buildings, compared to Rudyard’s single building. In 2014, the average sale price for a Harbor Springs home was $251,597, compared to $282,791 in 2012. The median price was $189,000, compared to $202,500 in 2012. Meanwhile, beachfront homes are valued at prices ranging from $150,000 for tiny cabins to $4.5 million for sprawling five-bedroom manses.

That’s a sizeable property-tax boon for the Harbor Springs district.

Rudyard Area Schools, meanwhile, last successfully passed a bond in 1998. With that $5.75 million loan, the school was able to remodel its media center. A bright new wing with windows that overlook green pastures of the Upper Peninsula functions as both the K-12 and the public library. The district now splits library expenses with a separate public library fund, also supported by local property taxes.

In 1998, the school was also able to remodel its high school gym, although the coaches fear that the high school locker room will not meet the health department’s standards upon its next inspection. In 2014, Rudyard attempted to pass another bond but both initiatives failed. Superintendent Mark Pavloski says the district will keep trying.

The district has tried not to let its substandard facilities compromise education. The district ranks 61 out of 705 schools on the Mackinac Center’s Context and Performance Database. But those academic achievements come against the backdrop of a district struggling to keep heat pumping.

For instance, in the frigid winters of the Upper Peninsula, heating costs that could be mitigated with capital improvements—the windows still retain glass from the 1960s—continue to dent the district’s budget. “Costs to heat a building were a lot less back in ‘60s, so we could get away with the glass we still have,” says Superintendent Pavloski.

However, Pavloski will be the first to tell anyone that sub-par facilities are not necessarily caused by poor fiscal management. Rather, many poorer districts have less money to put towards facilities projects, which means less flexibility. “Walk a mile in my shoes,” says Pavloski.

Or worse, drive that mile. Transportation, another area covered as a capital cost, is also an issue for Rudyard. Buses are especially valuable because the rural district encompasses the 20th largest area of any Michigan school district—more than 350 square miles. Offering transportation is imperative to retaining students who might otherwise choose to go to schools outside of their own district to schools that are probably equidistant to their homes.

Being a large district also means that its buses get more use than they get in other districts. The school’s Transportation Director, Brad Dumback recalls when a bus broke down early in its route from Trout Lake, over 50 miles away from the school. He had to drive another bus out to the students, while they waited in sub-zero cold for more than an hour. If a bond passes, the district will stock up on more new buses.

Across the state of Michigan, grants for school transportation are scarce. A handful of state and federal grants are available for safe routes to school, taking trips to art museums, bus driver training and making buses energy efficient. But no program seems to fit the Rudyard district's need to sustain a transportation fleet. In 2011, the district eliminated some of its bus routes across the district, but its board members voted not to abolish its program all together.

The rising costs of fuel could be mitigated by purchasing newer, energy efficient buses, but currently, the district doesn't’t have funds to do so.

Dumback keeps older buses around just in case of an emergency, when he may need to “scrap” an old bus to find a usable part. But to the district’s dismay, parts for the district’s newer buses rarely match those from older buses, so the school tries its best to allocate a reasonable amount towards transportation each year.

But if the district, which currently allocates more than $500,000 per year from its general fund to transportation expense, wants to purchase an $80,000 school bus it has to take more money from the general fund and cut elsewhere.

Pavloski sums up the budgetary gymnastics this way:  “It’s a shell game.” 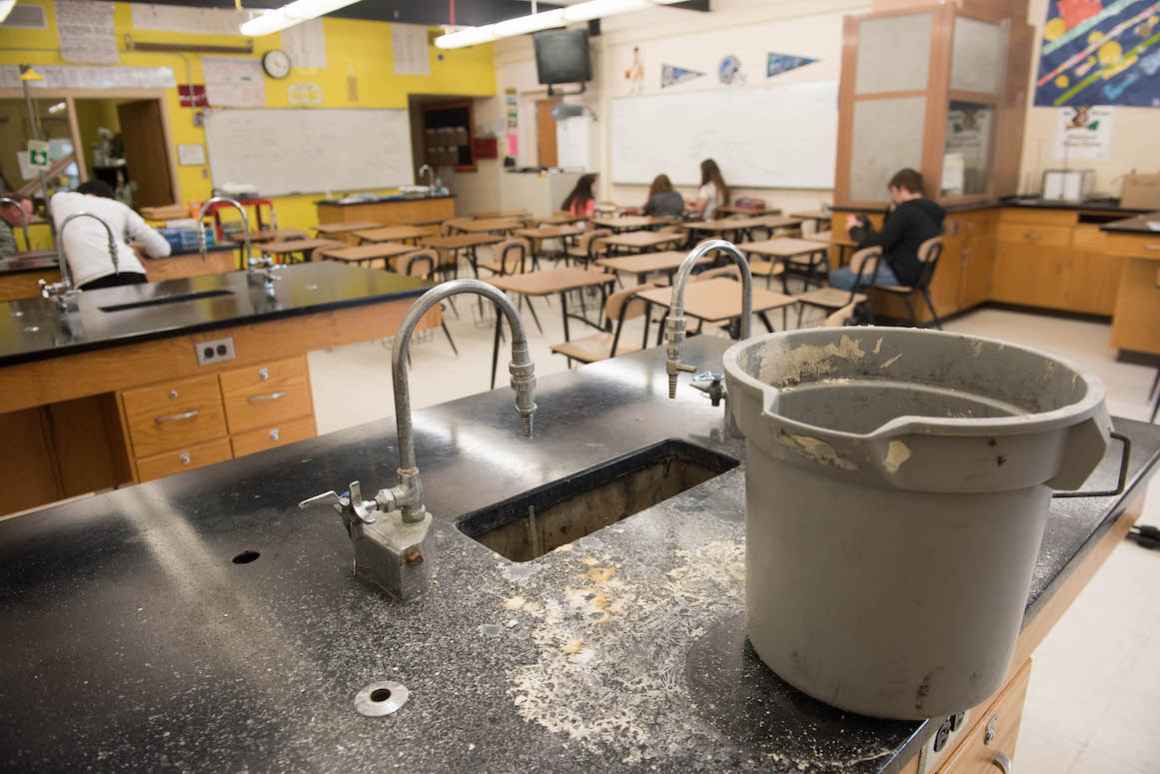 In the high school chemistry lab, a roof leak has made one of the lab stations unusable.