Aimee Stephens fights for us. Now let’s fight for her.

It was a do or die moment. Literally.

From the age of 5, Aimee Stephens had known she wasn’t like the boys she grew up with in a staunch Baptist family in Fayetteville, N.C. There was the boy seen by others, and the girl she knew she really was.

That duality continued for decades, fueling what she’s described as the “agony in my soul.”

It wasn’t until she was in her 40s that she began allowing her real self to emerge, and embrace herself as a transgender woman.

“My whole life, I tried to live as a man,” she says. “Eventually, I told my wife Donna the truth: I am a woman. She encouraged me to see a therapist, who I expected to tell me something was wrong with me. But after a few sessions, she told me there was nothing wrong with me. In fact, she helped me think through the steps I could take to become more comfortable expressing myself.

Send Aimee a message of support

“It started with going grocery shopping dressed as a woman, and then going out to eat with Donna. I remember when we first walked into a restaurant. Everybody naturally looked up to see who was coming in. There were no comments from anyone, and I felt relief. The more time I spent being me, the more I finally started feeling right.”

But there was one place where she had yet to be her true self: work.

Originally, Aimee intended to become a Baptist pastor. But while still in college she began working in a funeral home.

“There are a lot of different ministries people can pursue, and I realized comforting people during one of the most vulnerable points in their lives was my ministry,” she explains.

Eventually she landed in Michigan, working as a funeral director and embalmer for RG & GR Funeral Homes in Garden City for nearly six years before deciding to reveal herself as a trans woman to the owners.

It almost didn’t happen. The idea of coming completely out for all to see, and the negative ramifications that could hold, especially at work, brought her to the point of utter despair. It would be easier, she thought, to just end her life.

In November 2012, she went into her backyard and put a gun to her chest. She stood there for more than an hour, on the verge of committing suicide. But two thoughts ultimately kept her from pulling the trigger.

One was the loved ones who would be left behind.

“Killing myself would have ended my pain, but doing so would have created a lot more pain for the people in my life,” she says.

“I just decided I liked me too much,” she says.

Instead of ending her life, in that do-or-die moment, what Aimee decided to do was write a letter to friends and co-workers, revealing the truth.

It took months of writing and re-writing that letter as she struggled to express herself. When she finally found the right words, this is part of what she had to say:

“I realize some of you may have trouble understanding this. In truth, I have had to live with it every day of my life and even I do not fully understand it myself. As distressing as this is sure to be to my friends and some of my family, I need to do this for myself and for my own peace of mind, and to end the agony in my soul.”

On July 31, 2013, she handed the letter to her boss at the funeral home, telling him she intended to begin coming to work dressed as a woman. Without saying much in response, he slipped the letter into his pocket. Two weeks later, Aimee was fired.

With the help of ACLU of Michigan attorney Jay Kaplan, she responded by filing a complaint with the U.S. Equal Employment Opportunity Commission. After investigating, the commission sued Harris Funeral Homes in 2014, alleging the business had engaged in sex discrimination when it fired Aimee.

Last year, the U.S. Court of Appeals agreed that Aimee’s firing was illegal. Now the case is going to the Supreme Court this fall.

Aimee Stephens never sought to be in the limelight. And she never imagined her case would take on such importance. But she’s up to continuing the fight, even though kidney disease now requires her to undergo dialysis three days a week.

“Nobody should have to go through what I’ve been through,” she says. “The only way to make sure others are protected is to fight the wrong that was done to me.”

The waiting for her case to decided once and for all is hard, but she’s not backing down.

“We’ve done all we can do,” she says. “It’s up to the courts now. Hopefully they have enough common sense to figure it out and do the right thing.” 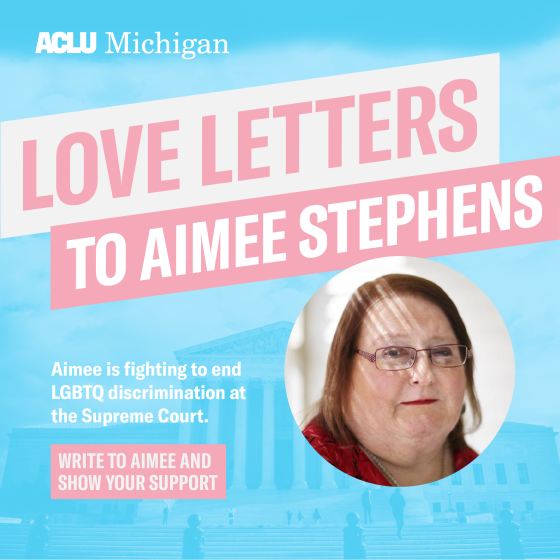 Funeral Home Unlawfully Discriminated Against Its Employee By...

ACLU Applauds Michigan Secretary of State for Creating a...