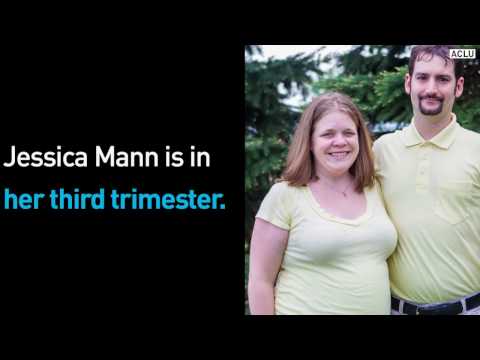 Jessica Mann is a woman with a life-threatening brain tumor.  In 2015, Jessica was scheduled to give birth by caesarean section delivery at Genesys Hospital in Grand Blanc.  Jessica’s doctors advised her also to undergo tubal ligation/sterilization at the time of her delivery because another pregnancy would increase the risks to her posed by her tumor, as would forcing her to undergo an additional procedure after the delivery.  Tubal sterilization is the most common form of permanent birth control in the world, and it is most safely administered during a C-section.

However, because Genesys is a Catholic-affiliated hospital, its policies are driven by religious directives (see above paragraph) rather than what is safest and medically appropriate for women.  Due to Genesys’s ban on this medical procedure, women who give birth at this hospital may now be forced to wait until they are healed from their C-section and then find another facility where they will undergo a second surgery that involves more risks and more healing time.

In Jessica’s case, she was forced to switch hospitals to a new doctor—one who has no relationship with her and no experience treating her serious medical condition—with less than a month left in her pregnancy.

In 2014 and 2015, the ACLU of Michigan wrote letters to the Michigan Department of Licensing and Regulatory Affairs urging state authorities to take action against Genesys because its policy violates the standard of care required of licensed health care providers under state and federal law.

In June 2016, state officials informed us that they would not take enforcement action.  In October 2016, the ACLU filed an administrative complaint on Jessica’s behalf with the Office for Civil Rights of the U.S. Department of Health and Human Services.  Following the change in presidential administration, however, we voluntarily withdrew the complaint in February 2017.

Reproductive Freedom for All Turns in Record-Breaking 753,759...

Reproductive Freedom for All Statement on Leaked Draft SCOTUS...