It’s been exactly one week since I wrote a column for the Washington Post that brought me both praise and derision from around the globe.

I’ve waded through thousands of messages and comments over the week that are familiar to most American Muslim activists who dare to have public opinions. Muslim women, men and our allies called the piece a “must read” and “inspired,” while bigots came out in full force to condemn me to a life of rape at the hands of Daesh (an Arabic acronym for the Islamic State militant group).

At one point, for a little levity during an otherwise overwhelming week, I joked that #dumbcunt must be trending on Twitter. The joke was always met with concern and disgust – the punchline seemingly lost on my friends, family and, eventually, me.

Also lost on most who tweeted and emailed me was the irony of replying to a column that attempts to explain Muslim suffering and dehumanization abroad and within our borders with the very hate, bigotry and Islamophobia I wrote about. While screaming at me that Islamophobia is a fabrication conjured up by liberals, commenters engaged in vile denouncements of my religion, my humanity and, sadly, my American identity.

The best-case scenario: the majority of my new friends didn’t read past the provocative headline “Stop Asking Me to Condemn Terrorists Just Because I’m Muslim.” At its worst: their opinions are an indictment of American exceptionalism, the false notion that America is uniquely noble and virtuous. Nothing in the hate lobbed at me over this past week is uniquely noble or virtuous; however, it is uniquely American. 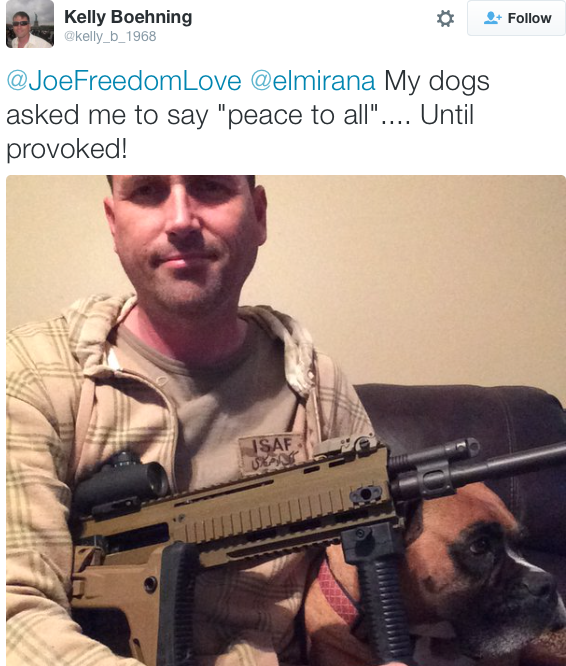 Predictably, some called for my deportation, rape, imprisonment and firing for writing a column, for speaking out, and for having an opinion they disagree with. Amongst the many photos of beheaded women, dead children, and American flags I received, one photo stood out. In it, a self-proclaimed “Christian, Conservative, Soldier, Grandfather” sat with his dog, rifle and International Security Assistance Force patch looking back at me on Twitter with the message: “My dogs asked me to say ‘peace to all’.... Until provoked!”

Much to my surprise, as I looked at his profile, I realized we actually have something in common -- we’re both fans of the First Amendment. He made his support known by bravely including #1A in his biographical information and sending me an intimidating picture and cryptic message, and I support the First Amendment daily in my work by speaking out in support of free speech even when bigots like him want to verbally attack me or peacefully protest at mosques and festivals. Clearly, one of us is a hypocrite, while the other is unapologetically – see what I did there – principled.

Surprising to some, I welcome the vitriol, just as I welcome the messages of support I have received. For each and every hate-filled message proves my point: Muslims are not threats. They are threatened.

Freedom of the Press is Under Attack