A Timeline: The Killing of Patrick Lyoya and the Grand Rapids Police Department’s History of Abuse

Calls for accountability and much-needed reform from communities of color have long been ignored, leading to this tragedy

The horrific death of Patrick Lyoya at the hands of a Grand Rapids police officer was not just preventable, it was predictable. GRPD has a long history of racist policing. The department relies on an enforcement-only approach to public safety, tolerates violent solutions to nonviolent situations, and fails to hold officers and those they report to accountable. Mr. Lyoya, a father of two small children, would be alive today if city officials and the GRPD had listened to the longstanding calls from advocates to reinvest in, rather than over-police, communities of color. The following is a timeline setting out some of the most flagrant examples of GRPD’s long history of abuse of Black and Brown people, and the dangerous lack of accountability that allows those abuses to continue. 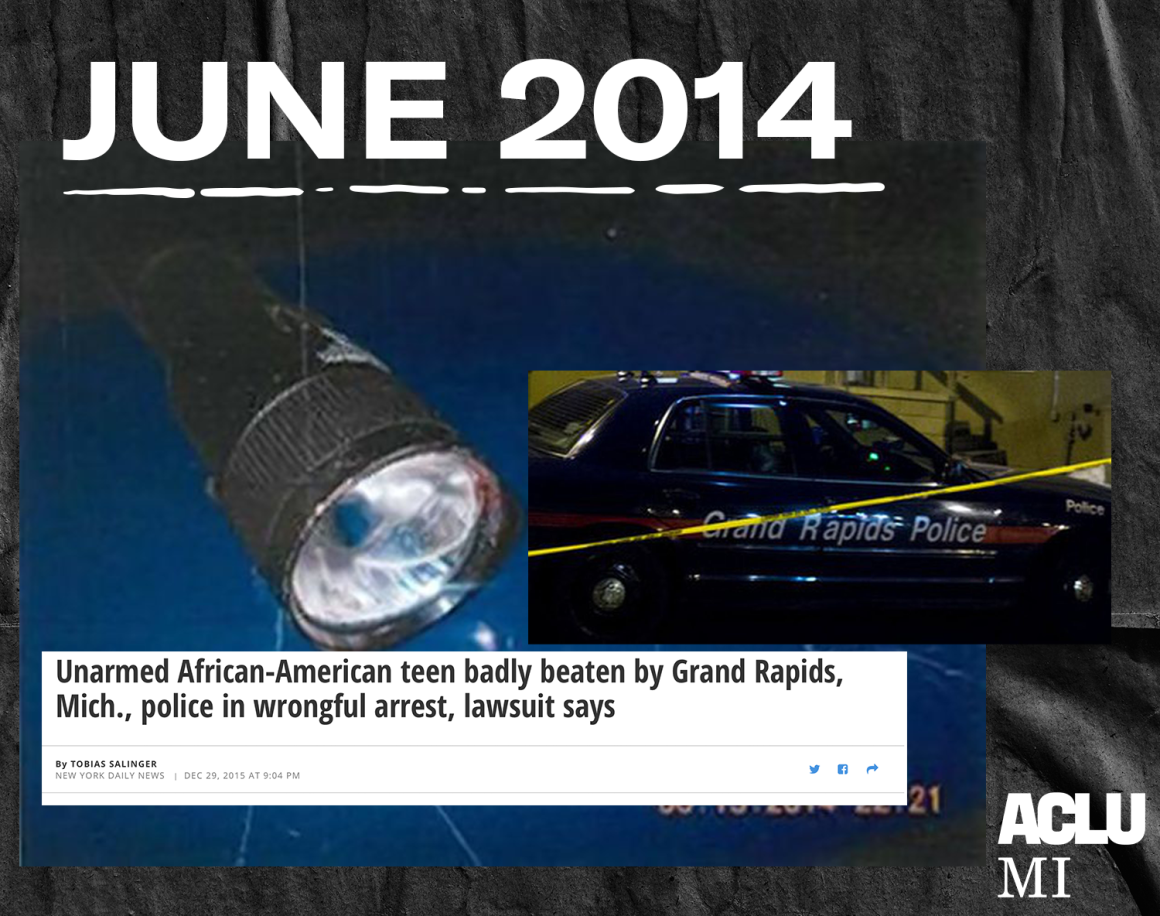 A Black 15-year-old is badly beaten and bludgeoned with a flashlight by a GRPD officer.

The ACLU sues the GRPD over its Orwellian “no trespass letter” program that targeted people like Jacob Manyong, an African immigrant arrested and charged with trespassing because the back tire of his car crossed the property of a private business as he drove on an adjacent public lot. An outside expert’s analysis of GRPD records reveals that 70% of officer-initiated stops under the program were of Black people in a city where, according to the most recent census data, only 18% of the population is Black. Both state and federal courts found that arrests under the program were unconstitutional.

GRPD officers responding to noise complaints at a large house party forcibly arrest the host and eight others – all Black residents. One guest is tased. Six of the nine people arrested file excessive force complaints with the GRPD. Up to 35 officers are on the scene at one time. 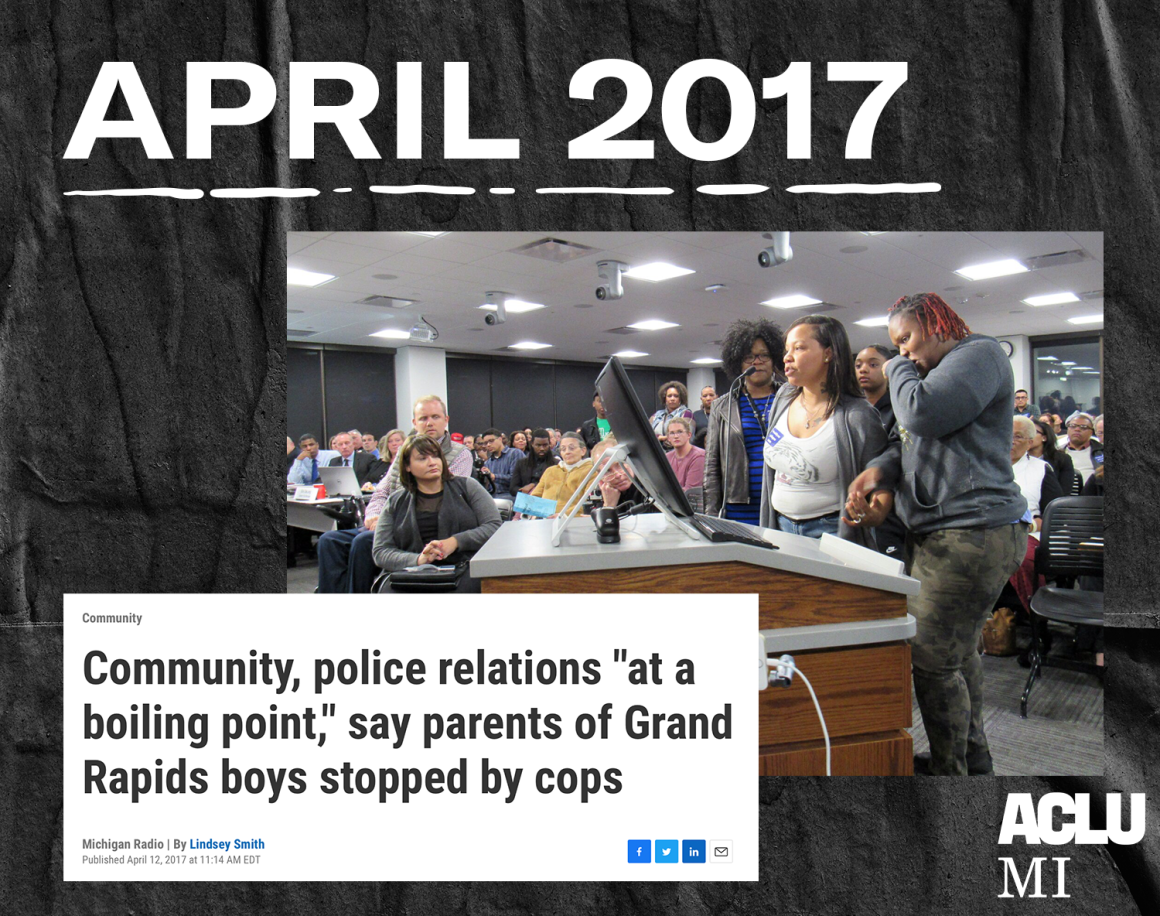 A study shows Black drivers are more than twice as likely to be stopped by the GRPD than white drivers.

A GRPD officer points a gun at and handcuffs an unarmed 11-year-old Black girl, Honestie Hodges. 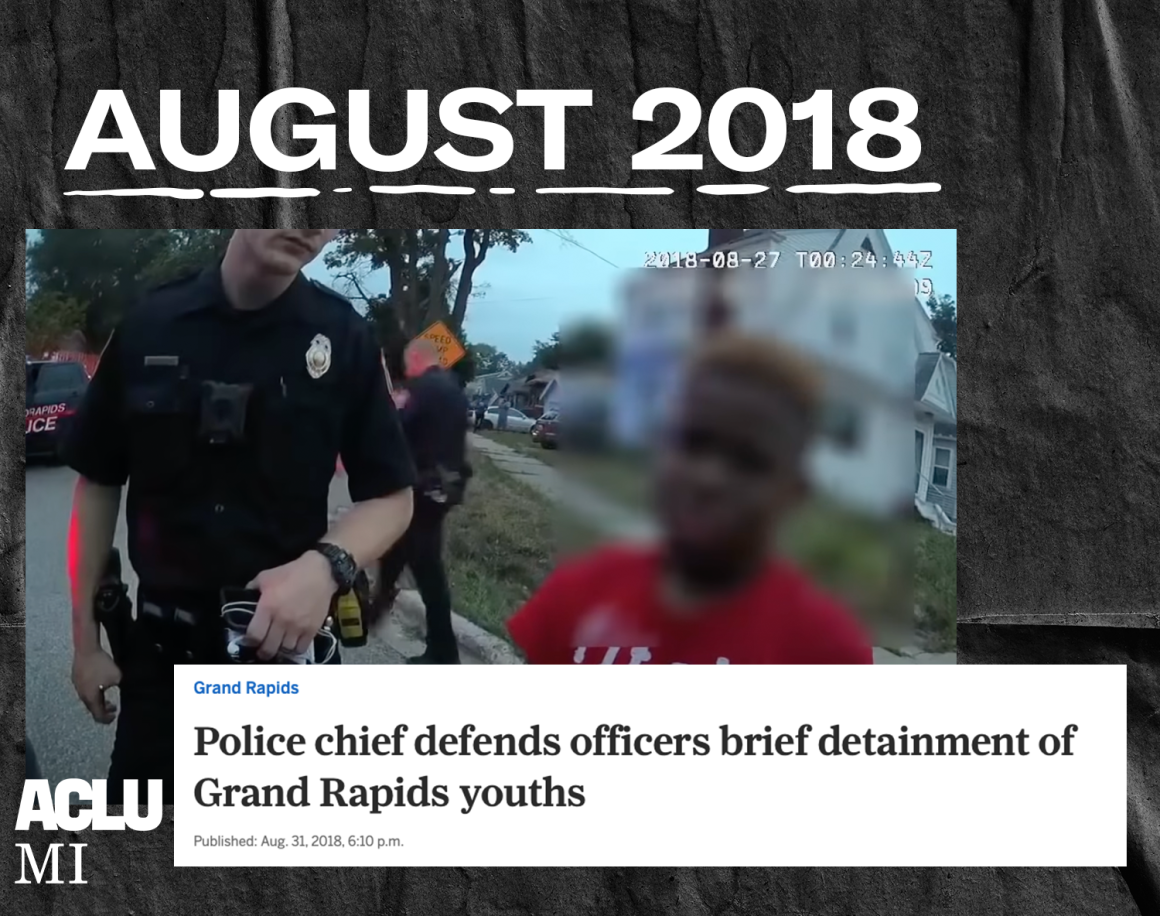 At least six GRPD patrol cars and as many officers handcuffed unarmed 11-year-old twins and 17-year-old, all Black boys, at gunpoint.

A GRPD officer shoots at a Black 14-year-old boy playing with a BB gun.

A 12-year-old Black girl is handcuffed at gunpoint by a GRPD officer, which the police chief describes as “appropriate”. 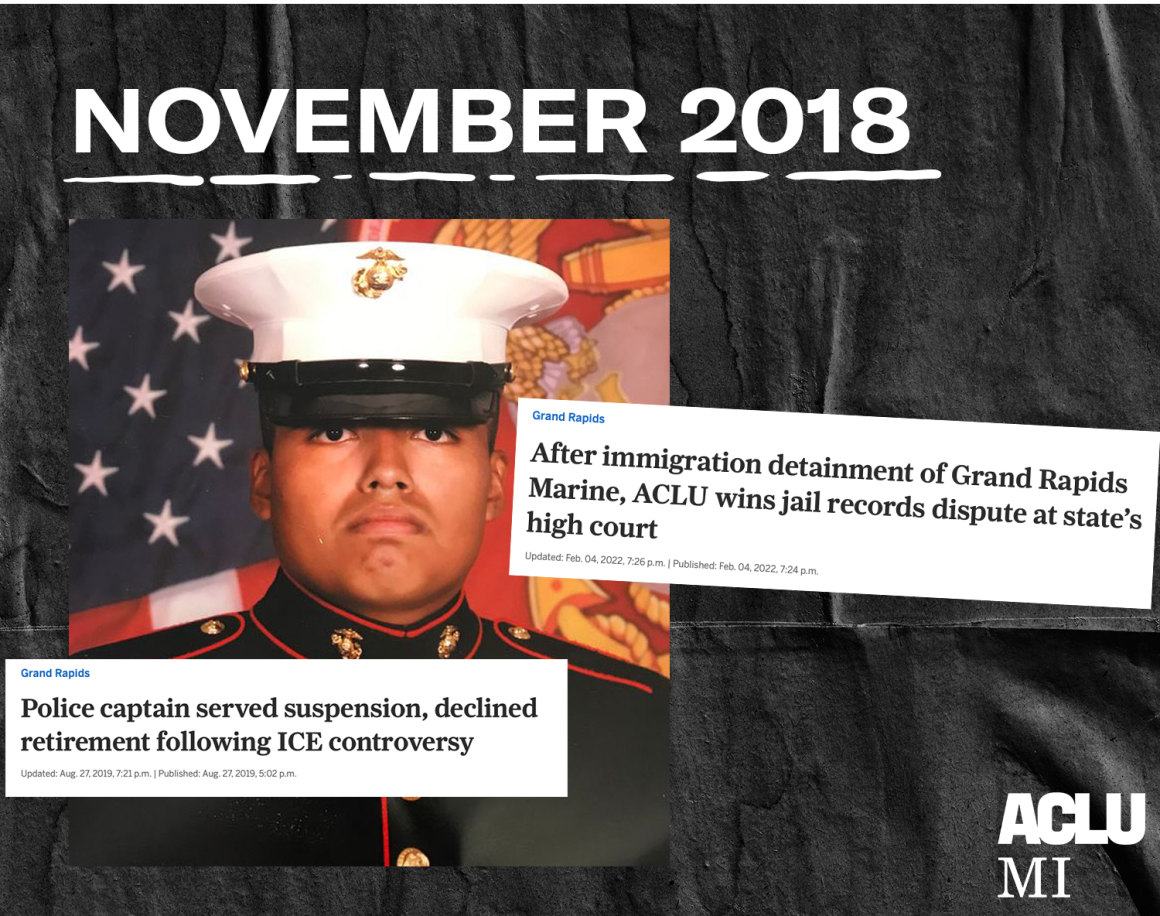 A GRPD police captain wrongly calls Immigration and Customs Enforcement on Jilmar Ramos-Gomez, a decorated Marine Corps veteran who was arrested with his U.S. passport on him after a mental health incident. Mr. Ramo-Gomez spends three days in immigration detention as a result.

Two Latino teens, who are jaywalking, are held at gunpoint by a GRPD officer.

GRPD officers pull a Black man out of a car and beat him.

The Michigan Department of Civil Rights holds hearings on racial discrimination by the GRPD. The MDCR’s investigation has not yet been completed.

After a court rules that records from a secret GRPD phone line—which officers believed was not being recorded—were subject to public records requests, Grand Rapids city administrators erase those recordings over the weekend rather than release the records. 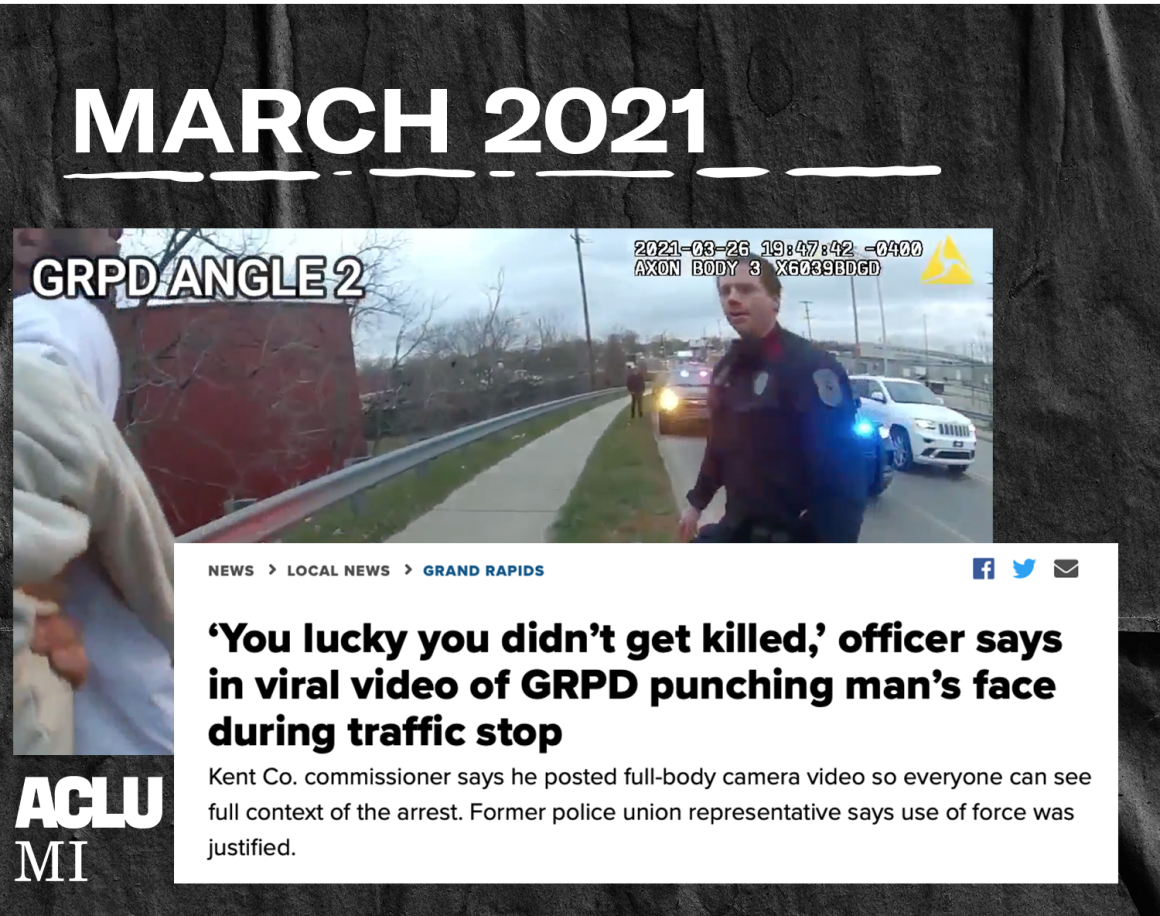 A GRPD officer punches a Black man in the face at a traffic stop, and tells him, “You lucky you didn’t get killed.”

The Michigan Supreme Court hears a case challenging the GRPD’s photograph and print program, under which Keyon Harrison, a Black 16-year-old, was fingerprinted after GRPD officers thought it suspicious that he helped another youth carry a toy fire truck, and Denishio Johnson, a Black 15-year-old, was similarly fingerprinted even though he likewise was never charged with a crime. An expert analysis of the program found that 75% of the officer-initiated encounters involved Black people while only 15% involved white people. This in a city where, according to the U.S. Census Bureau, more than 65% of the population is white and only 18% is Black. A decision is pending.

A GRPD officer accidentally fires his gun while pursuing a Black male, who is mistakenly suspected of stealing a vehicle.

An audibly terrified pregnant woman asks more than a half dozen GRPD officers to stop pointing their guns at her in front of her house, after GRPD pursues her boyfriend for driving with no plates on his car. They are a Black couple. 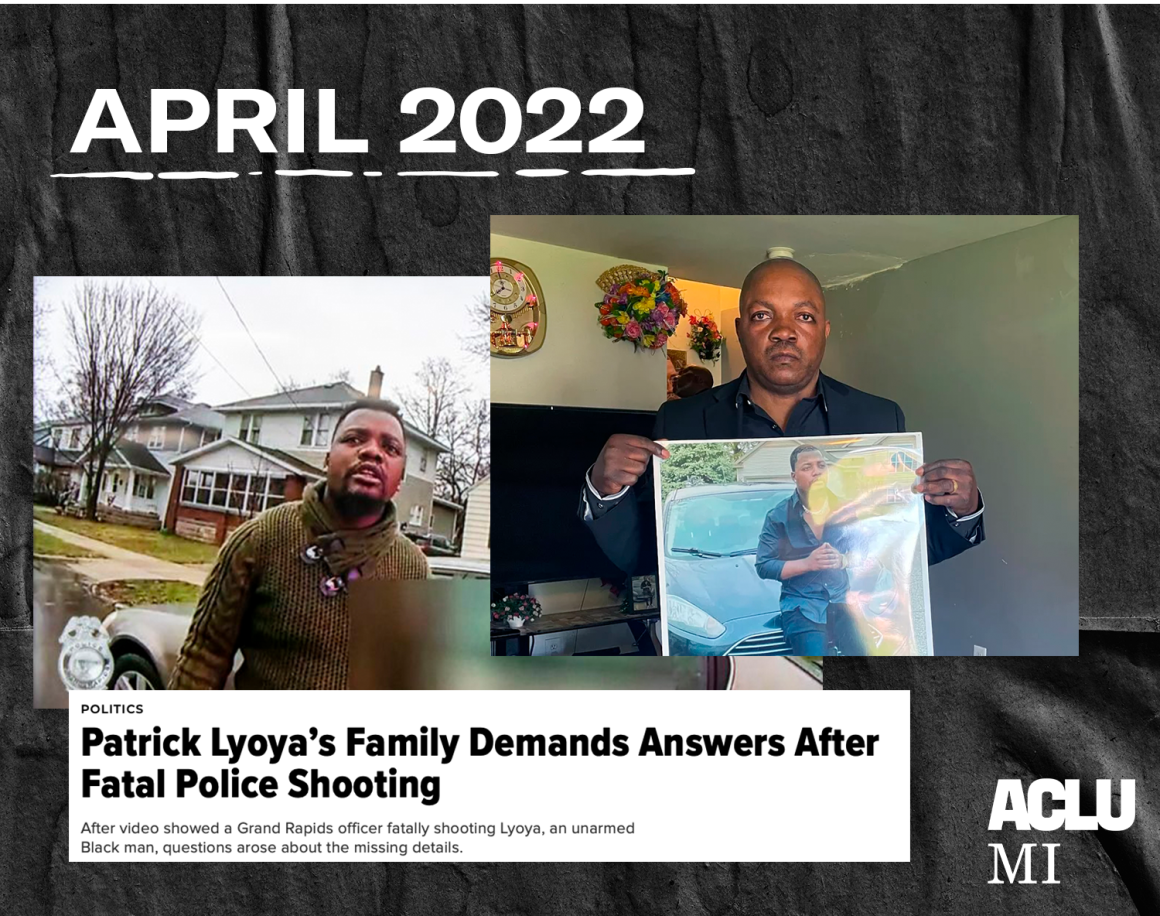 Patrick Lyoya, a 26-year-old Congolese immigrant, is killed by Christopher Schurr, a Grand Rapids police officer, following a traffic stop purportedly conducted because of a license plate problem. Video shows Mr. Lyoya exiting his vehicle, apparently confused. The officer put a hand on him during a verbal exchange – which Mr.  Lyoya tries to walk away from.  It should have ended there. Instead, the officer follows and tackles Mr. Lyoya, pulling a taser as they struggle, striking Mr. Lyoya,  pinning him down, and then killing him with a point-blank shot to the back of the head.

Accountability requires not just full transparency, but a commitment to fundamentally changing policing so that no more lives are lost. The city of Grand Rapids and GRPD must listen to the voices of Mr. Lyoya’s family and those at the forefront of this struggle about what they need in this time of crisis. We urgently call on the city of Grand Rapids, GRPD, and government officials to take the following immediate steps: