The American Civil Liberties Union (ACLU) and Michigan Immigrant Rights Center (MIRC) today released documents obtained through a public information request of the Grand Rapids Police Department that show that the officer who called U.S. Immigration and Customs Enforcement (ICE) on Jilmar Ramos-Gomez, a United States citizen and decorated Marine combat veteran, racially profiled him and mocked his disability. On Friday the Grand Rapids Police Department (GRPD) announced that it concluded its investigation into the GRPD’s role in ICE’s arrest of Mr. Ramos-Gomez and exonerated the officer, who contacted ICE, but did not name him. The documents released today identify the officer as Captain Curt VanderKooi.

A timeline provided by the ACLU and MIRC shows that Captain VanderKooi, while watching a TV news story about Mr. Ramos-Gomez’s arrest on November 21, 2018, emailed ICE officer Derek Klifman, asking: “Could you please check his status?” Another ICE officer, Matthew Lopez, responded two days later, on November 23, 2018, saying he had determined Mr. Ramos-Gomez was a foreign national and thanked Captain VanderKooi for “the lead.” On November 26, 2018, Captain VanderKooi sent ICE the police report. The email, which had the subject line “Spectrum Helicopter Pad Loco,” said: “It is not clear what mad intent was involved in this breach of hospital security but here is the report.”

“Captain VanderKooi, after seeing a photograph of a person who is recognizably Latino and has a recognizably Latino name, called ICE,” said Miriam Aukerman, senior staff attorney at the ACLU of Michigan. “And then he mocked Mr. Ramos-Gomez for his disability, referring to him in derogatory terms as ‘loco’ and ‘mad.’ Yet he is not being held accountable. We can’t begin to restore community trust until the GRPD recognizes this for what it is: racial profiling compounded by ridicule of a person who experiences Post Traumatic Stress Disorder as a result of his service to our country.”

The GRPD, in announcing the exoneration of Captain VanderKooi, stated that he contacted ICE because he was concerned about a potential act of terrorism. The documents show that investigating officer, Sergeant Griffen, quickly discounted any such possibility and texted his FBI contact at 11:42 a.m., “Vet, PTSD, But not a FBI issue.” Captain VanderKooi did not contact ICE until 7:40 p.m. 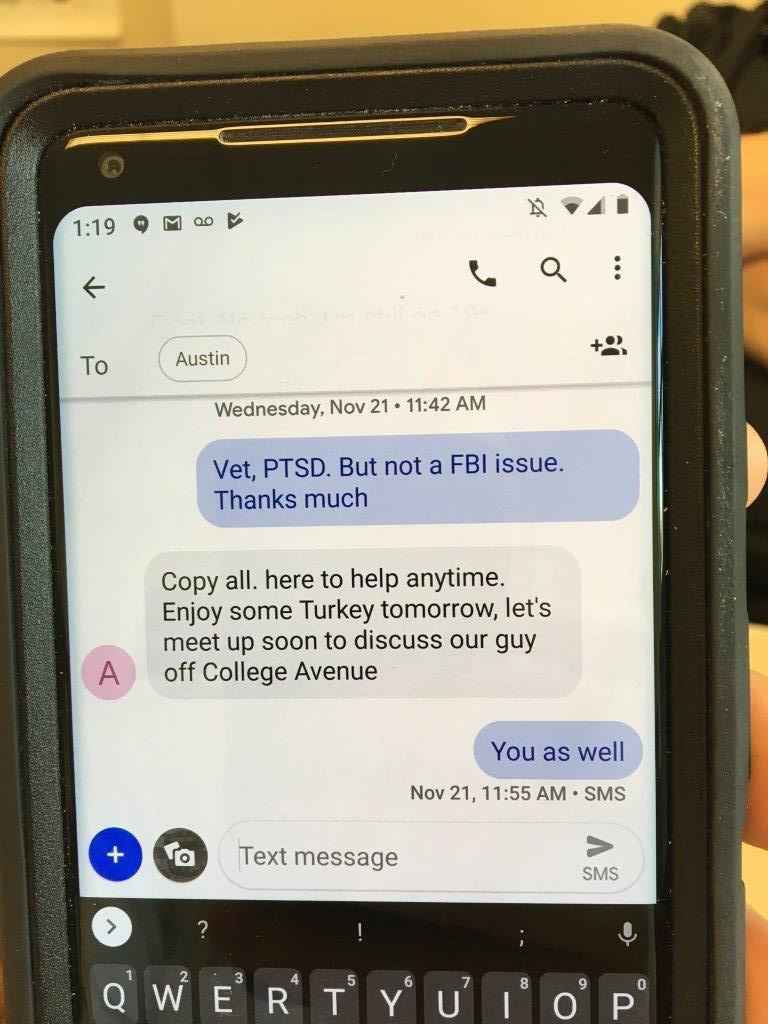 “It was perfectly appropriate for GRPD officers to contact the FBI during their investigation because that’s the relevant federal agency,” said MIRC attorney Hillary Scholten.  “But there was absolutely no reason to contact ICE.  Captain VanderKooi has trained with the FBI, but he didn’t call on them.  He called on the federal agency responsible for deporting foreign citizens. To suggest that Captain VanderKooi was investigating terrorism, when he asked ICE only about Mr. Ramos-Gomez’s ‘status’ and did not follow up despite not receiving a response for two days, doesn’t pass the laugh test. This was racial profiling pure and simple.”

The documents also show that when GRPD officer Adam Baylis informed prosecutor Daniel Helmer that ICE would be taking Mr. Ramos-Gomez into custody, Prosecutor Helmer responded: ““I am confused.  Didn’t his property have a US Passport in it?  And he was a veteran?!” Officer Baylis responded:  “Who knows, not sure it was a US passport…. I am not sure about the vet thing.” The police report notes that Mr. Ramos-Gomez’s US passport was among his possessions when he was arrested. That passport was in the possession of GRPD at that time, and Officer Baylis easily could have checked that fact if he did not remember. The passport remained in the possession of the GRPD until after Mr. Ramos-Gomez was released.

“Even when GRPD officers were specifically reminded that Mr. Ramos-Gomez is a US citizen, they did not bother to check the evidence locker for his passport, despite knowing that ICE was trying to deport him,” said Ms. Aukerman. 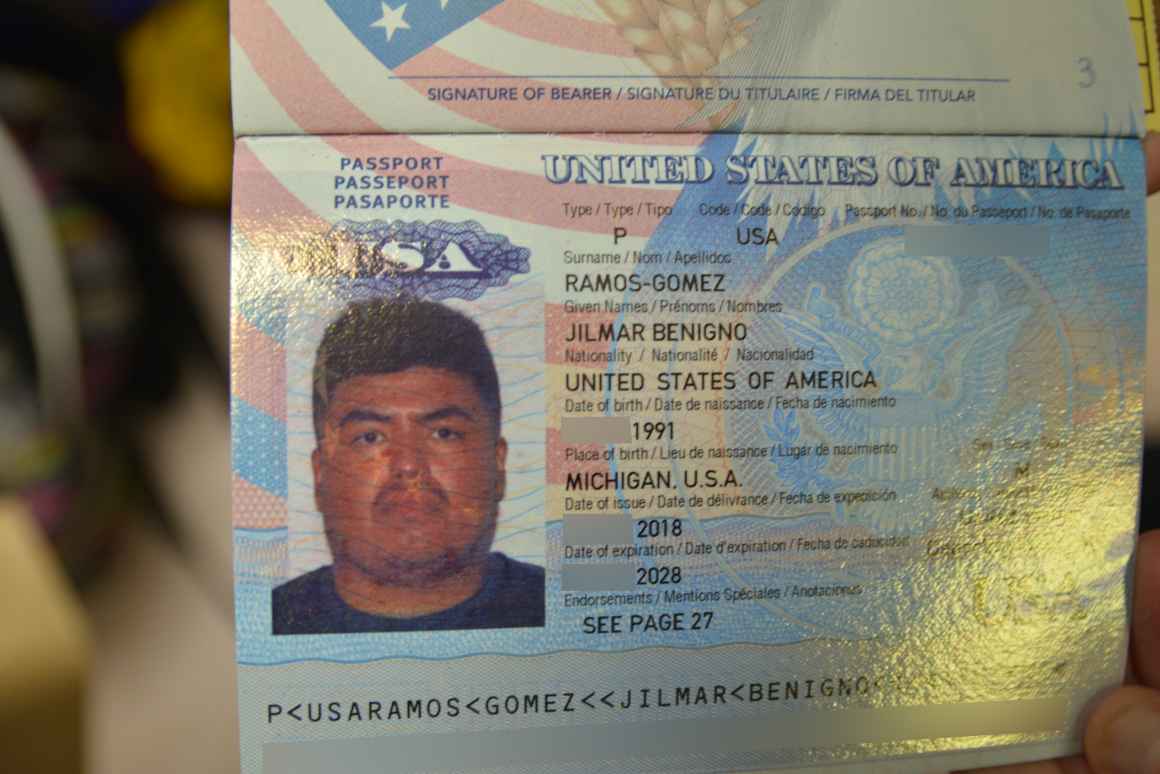 “We are deeply troubled by such callous disregard for the terrible situation Jilmar was in.”

“The close coordination between ICE and the GRPD is laid bare in these documents, with ICE encouraging the GRPD to continue passing on any ‘good leads,’” said Ms. Scholten. “As this case shows, such entanglement between GRPD and ICE must stop, for the safety and health of our community.”

8:32 a.m.  Mr. Ramos-Gomez is arrested for an incident at Spectrum Hospital where he trespassed on the helipad after damaging a keypad. There is scorching under a sprinkler and some burnt items are found in his backpack.

12:34 p.m.  The GRPD issues a press release about an arrest at Spectrum Health, noting that there was “minimal damage” and “no additional concern for danger.”

4:02 p.m.  A “Shift Summary” is sent to all sworn GRPD personnel. It includes information at the arrest of Mr. Ramos-Gomez.

7:40 p.m.  Wood TV reports a story about the arrest, which names Mr. Ramos-Gomez. The story includes his mug shot, in which Mr. Ramos-Gomez is recognizably Latino.

7:40 p.m.  Captain Curt VanderKooi, who is at home watching the news, sends an email to Derek Klifman, an ICE officer responsible for deportations of immigrants with criminal convictions.  Captain VanderKooi’s email asks:  “Could you please check his status?”  The description of the arrest from the “Shift Summary” is pasted into the message.

9:54 a.m.  ICE Officer Lopez emails Captain VanderKooi about Mr. Ramos-Gomez:  “I was able to interview that subject at Kent County this morning, and he is a foreign national illegally in the U.S.  Thank you for the lead he will be coming into our custody when he is released from his criminal case.  Let me or Derek know if you ever have any other good leads.”

1:27 p.m. — 3:40 p.m.  Spectrum Security reports that the value of the damaged keypad is $120.65, “So not even $200” (which is necessary if Mr. Ramos-Gomez is to be charged misdemeanor destruction of property over $200, one of the charges previously authorized by prosecutor Daniel Helmer). Prosecutor Helmer responds:  “Well, can we say labor to install and time spent to wipe off the soot?”

3:43 — 3:59 p.m.:  GRPD Officer Adam Baylis forwards the message from ICE to Prosecutor Helmer, noting “Also looks like ICE will be taking custody upon release for a period of time…”

ICE takes Mr. Ramos-Gomez into custody when he is due to be released from the Kent County Jail, and transports him to immigration detention in the Calhoun County Jail.

Mr. Ramos-Gomez is released from Calhoun County Jail after intervention by his family’s attorney.

[1] This timeline is based on records produced to date, as well as information that the ACLU and MIRC were told at a meeting on February 11, 2019 with Interim Police Chief David Kiddle and attorneys from the City Attorney’s Office.

Is All of Michigan a Warrantless Border Zone?

The Drive to Thrive