One of the oldest public-school districts in part of the state, the Muskegon City Schools district has spent more than 120 years educating children in and around the southwestern Michigan community.

But district officials say defections of students to charter schools, a decline in the statewide birthrate and the erosion of local property values have left the district struggling to keep pace with the neighboring North Muskegon schools—a district with double the median home value as the Muskegon City Schools. The Muskegon district now educates roughly half of the 10,000 students it once did in the 1960s, which was last time many of its school buildings saw significant renovations.

While the population of the district has decreased, the looming brick buildings that were constructed decades ago to serve larger numbers of students have remained the same size. And along with those oversized buildings come the oversized costs of keeping them maintained—a difficult endeavor when left solely to property taxes in a district whose median home value is $66,000. Of the state’s 548 districts, Muskegon City Schools ranks 517th in taxable value per pupil.

Without funds beyond their local tax base for capital expenditures, Muskegon City Schools can neither build newer buildings to accommodate the smaller student body nor upgrade the current structures to be more cost-efficient. “When I got here four years ago,” says Muskegon City Schools Superintendent Jon Felske, “I closed a third of all of our buildings—because financially you can’t run one building for 187 students and have a full-time secretary and a principal there, too.”

However, closing of the school didn’t free up all of the decommissioned building’s excess equipment for use in other facilities.

“When I closed schools, I consolidated playgrounds, but you can’t move playground equipment,” says Felske. “Once you move it, it’s considered out-of-code. You can’t take a [slightly newer], used swing set and install it in an existing playground at another school. We now have more kids per building, but we didn’t add playground equipment.”

In some tax-rich districts, gently sloped rubber rock climbing walls make recess safer. Not so in Muskegon City Schools. A recent visit to the district’s elementary schools finds playgrounds ravaged by time. Several layers of paint peel from antiquated aluminum slides. Swings reveal metal welded in the 1960s. Monkey bars are worn slick by a century’s worth of being gripped by grade schoolers.

For Felske, the remedy is obvious: “With proper funding, we could purchase appropriate playground equipment.”

But for now, not only does the district lack the funding. It’s in a fight to hold on to what resources it does currently have, be those students or dollars.

Muskegon City Schools, just like the 12 other local districts overseen by the region-wide Muskegon Area Intermediate School District, is a school-of-choice district, meaning that students can opt-in to another district and out of their own. And since schools-of-choice are not required to provide transportation to students outside of district lines, populations with more resources tend to migrate out while those with less stay behind.

(The migration of students out of Muskegon City School District also has led to worsening racial balkanization in a city whose metropolitan area was named by Brown University researchers as the sixth-most segregated in America. Although the City of Muskegon is roughly 35% African American, the city’s traditional public school system is 57% black. Meanwhile, nearby North Muskegon, with a 2% black resident population, has a 4% black student enrollment.

With every student who migrates from his or her home district to another, the per-pupil dollars that accompany that student are lost to the student’s district of choice. There is also an increased chance that the home district will lose a household’s votes for a bond or a sinking fund millage as voters may not favor a tax that doesn’t directly benefit their own children.

Similarly, districts that receive students from outside may not receive the votes necessary because many of those who attend their schools do not live within district lines. As school districts across Michigan become more dis-aggregated, capital expenditures funding from within local boundaries makes less and less sense.

Thus, in being forced by the state to rely solely on local property taxes for capital expenditures, districts like Muskegon find themselves trapped in a cycle of cuts and attrition.

Inadequate school facilities perpetuate the drain of students from lower-income districts to those with more means. Charters schools, or “public school academies” (PSAs), have more options to start out small and grow with their populations; they are not saddled with the financial burden of buildings that are too large for their populations. Muskegon has seen five PSAs open since 2009.

Although Muskegon Public Schools passed an approximately $12-million bond in 2009, the district has not made any large renovations to its high school since 1997. The 2009 bond money needed to go to school bus purchases and to improvements to athletic facilities, investments that Felske regards as crucial in their own right: “You can’t cut things like busses or sports because then you lose students to other districts.”

Bond money is fleeting. By law, districts must spend this money within three years. Muskegon Schools Superintendent Felske says that bonds allow the district to make immediate repairs: “You get a large chunk of money up front, and you get to do things right away, but then the money is gone.”

While the money is available right away, the district must decide in advance how it will use the money. Further, the debt stays with the taxpayers for up to 30 years. Felske says that there are improvements that even the bonds can’t address. “You can’t do plaster work under a bond issue,” he notes. “Now we want to do plastering because it’s been neglected for a century.”

In August of this year, the district residents voted against a sinking fund measure that would have given the district a “spend-as-you-go” account for its facilities and $750,000 a year over 10 years to help complete longer-term renovations. Because the measure failed, the district will continue to spend precious resources launching future campaigns to lobby for the ever-dwindling but life-sustaining financial support of its residents.

But the dire circumstances inside the city’s schools will ensure that those campaigns continue.  Consider, for instance, the 34-year-old auditorium at Muskegon High. Its plaster walls are covered with areas that are in various stages of peeling. When the lights are turned on during a show, the audience can see flakes of plaster floating above the stage like snowflakes (a distraction to any other production save perhaps A Christmas Carol).

The auditorium also sorely needs to modernize a lighting system centered on increasingly obsolete electric bulbs. With the theater industry rapidly shifting to LED bulbs, electric lightbulbs are becoming less common. Without an upgrade to LED lighting, Muskegon risks being unable to replace its current bulbs at a reasonable cost.

According to Sam Wiltheiss, Director of Buildings and Maintenance for Muskegon City Schools, when the auditorium is full and all the lights are on, the space gets so hot that staff must open the fire dampers behind the stage, exposing the facility to the elements. One reason for this is the high school’s antiquated heating system.

Consequently, the boiler is located at one end of the campus, and the steam heat must be pushed through underground pipes all winter long. This takes extra time to warm up the buildings. Heating multiple buildings costs more, and energy costs also soar because the steam must be pushed over a longer distance to reach the buildings.

Larger, aging grounds with fewer students also mean higher maintenance costs. Maintenance costs come from the district’s general fund, which is also the source for instructional expenses. Outside of one of the high school’s buildings, a major sinkhole is growing. It is the district’s responsibility to repair this. If the sinking fund had passed, the district would have renovated some of its parking lots and prevent the regular recurrence of sinkholes. Until a sinking fund gets approved by voters, higher repair costs for numerous emergencies will continue to eat into instructional spending.

As the high school was steadily cobbled together, the additions were rarely renovated. Downsizing is difficult, because each component of the school contains a different important feature—whether a gym, auditorium, library or cafeteria.

In the same wing as the auditorium, rolled rubber flooring, which contains asbestos, was installed in the 1960s, and hasn’t been changed since. The material is bubbling over at every seam, even in the center of the floor, detaching from the concrete subfloor underneath.

Asbestos mitigation would cost the district millions of dollars.

And so, like many of the physical problems that confront the district, school officials can only stand and watch the problems take their toll.

“To remove the asbestos or the floor would be a lot of money,” says Facilities Director, Wiltheiss. “So we put floor finish over it to seal it—but we try not to touch it.” 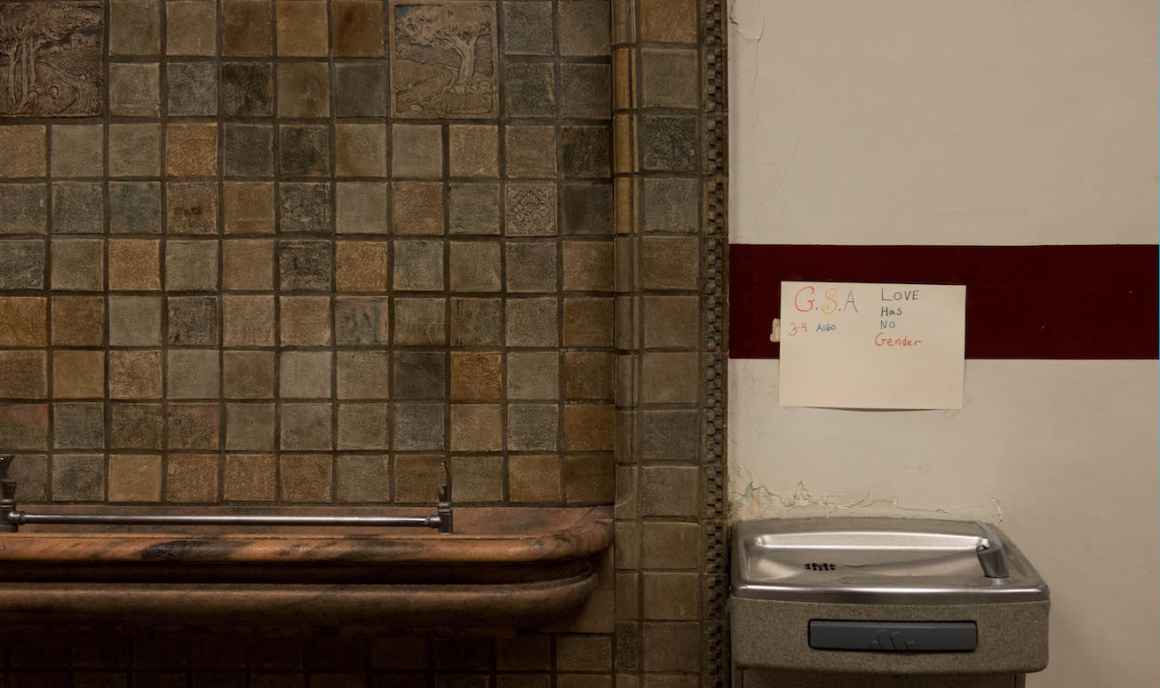 Plaster cracks around the wall-mounted base of a water fountain at Muskegon High. 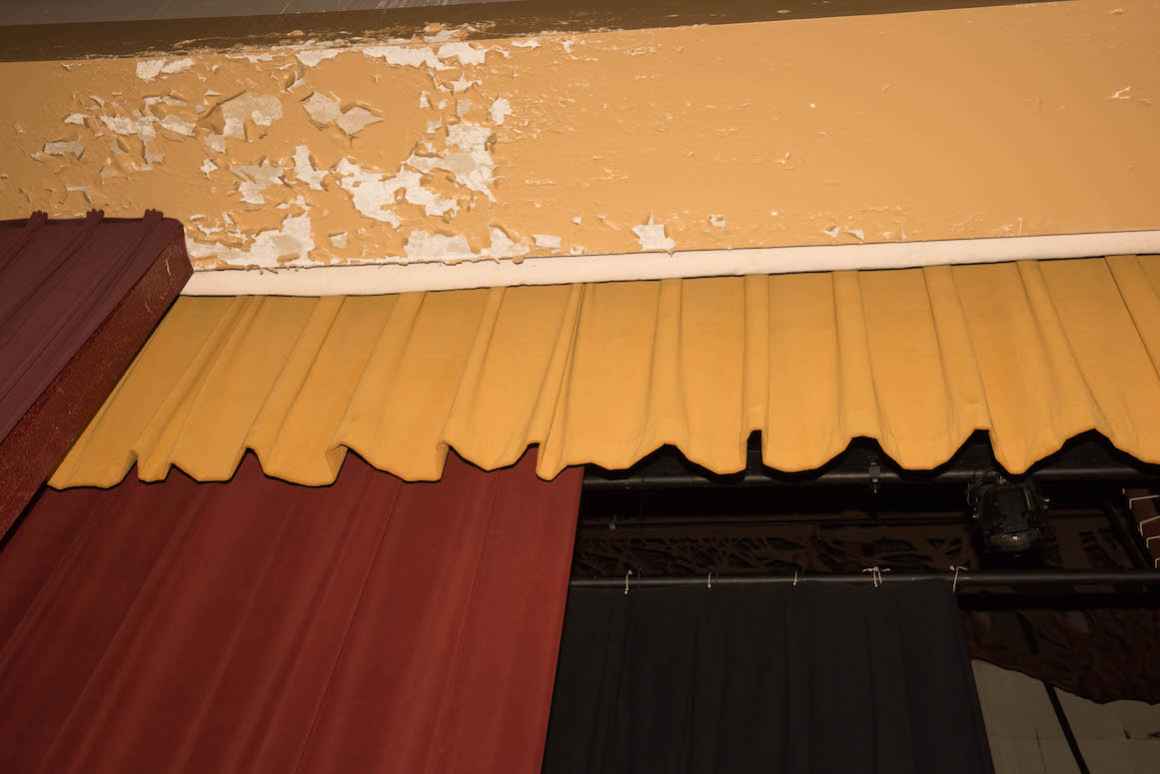 Plaster flakes off of the walls inside the 1960s-era auditorium at Muskegon High School.