At the Capitol: Taking a Stand for Women

The committee room was packed: women in bright pink tees, young aides in black suits, babies and distinguished physicians. Stickers and laptops and video cameras were out and at the ready.

This was not the typical show for a 9 a.m. House Committee on Health Policy meeting in Lansing.

At issue was the committee’s approval of what many consider to be the worst assault on women’s health in Michigan history. If passed, the three-bill package (HB 5711, HB 5712, and HB 5713), will effectively make abortion inaccessible to women in our state.

Not only would these bills burden the already-limited number of abortion providers with new and expensive regulations, they would also significantly intrude on the protected doctor-patient relationship, forcing physicians to conduct scripted inquiries into the personal lives of their patients.

Needless to say, the bill provoked quite an outpouring of opposition. I had driven up early from Ann Arbor with a group of semi-retired professionals, all women, all activists. They couldn’t believe that they were still fighting this fight.

For me, it was one of my first opportunities to participate in the struggle for choice that so many women before me have faced. I didn’t know exactly what to expect from the hearing, but I felt certain of my own anger.

These bills are dangerous—they threaten to not only endanger women’s lives across the state, but also fortify the growing social apparatus designed to manage and control women. The energy of the room was palpable. The hearing began, and almost immediately, it became clear that there would be maneuvering to push the bills through quickly.

Testimony began, and after the first few speakers emotions began to rise throughout the room. Clapping and encouragement for some speakers erupted spontaneously and was promptly struck down by the chairwoman’s gavel.

The chair's attempts to enforce the appearance of an everyday session was incredibly frustrating. Rarely have I ever felt so powerless. Facing such an immediate threat, how could we be cool and collected?

Despite the fact that the bill had only been introduced two days prior and over 50 people were waiting to speak in opposition (including many representative of women’s groups across the state), the meeting was abruptly ended before many had a chance to publically air our concerns.

The bills were approved. The committee was quickly adjourned. Those of us in opposition to the bills were left enraged, speechless, or in some cases, in tears. In the video below you can see one woman who had waited to tell her story cry out to the legislators, shouting to be heard. The committee's cold reaction even warranted a post on Rachel Maddow's blog. 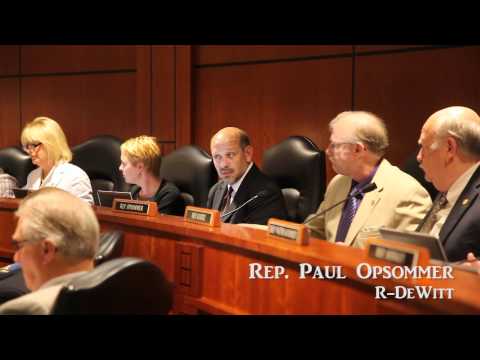 Emboldened by my frustration, I actually look forward to the weeks ahead. There is no question it will be a fight.

With the ACLU of Michigan, its reproductive health allies and all the supporters of women's health on the case, there’s no question in my mind we’ve got as good of chance as any to convince the legislature not to approve these bills. But it’s becoming clear we’ll need all the help we can get.