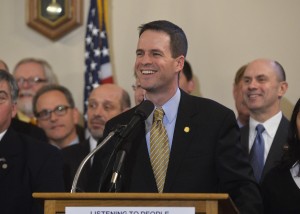 “This is exactly why House Republicans were so adamant that strong fiscal oversight be a prerequisite to any additional state funding for Detroit’s corrupt and broken school administration,” said the Republican from Mt. Pleasant. “And it is why we will continue to insist that strong financial and academic reforms be a part of any long-term solution to decades of DPS failures.  Detroit’s children and Michigan’s taxpayers simply deserve better than to be fleeced again by these crooks.”

Which opens the door to an important question: What’s life like in that alternative universe Cotter apparently inhabits?

The query arises because Cotter’s comments are light-years away from the reality of Detroit Public Schools and its governance. Somehow, it seems as if Cotter has failed to get the news that it has been the state—not the elected Detroit school board— that’s been firmly in control of the district for the past seven years.

As the result of actions taken by the state, a democratically elected school board has only controlled Detroit Public Schools for three years since 1999. An appointed board, with the state’s superintendent of public instruction holding veto power, was in power from 1999 to 2006. In 2009, the state assumed full authority when the first of a series of gubernatorial appointees took over management of the district.

Read more about the history of emergency managers in Detroit Public Schools.

Then governor, Jennifer Granholm's EFM (emergency financial manager) appointee Robert Bobb came in with guns blazing as the new sheriff in town. Almost immediately, Bobb tried to establish his bona fides as a corruption fighter by releasing an audit that indicated more than 250 people were drawing DPS paychecks without actually working. Bobb’s claims about these supposed ghost employees generated big headlines and a positive vibe for the new school’s chief.

Little noticed, however, was Bobb’s testimony before the Michigan Legislature two years later, when he citied successes rooting out corruption but had to admit that a “payroll verification audit determined that the district did not have ghost employees…”

What Bobb did have was Barbara Byrd-Bennett, who was paid nearly $18,000 a month and had an armed personal driver as the district’s chief academic and accounting officer. In 2015, Byrd-Bennett “pleaded guilty to helping steer $23 million in no-bid contracts to education firms for $2.3 million in kickbacks and bribes while she worked at Chicago Public Schools after leaving Detroit,” according to the Detroit Free Press. The paper also reported that FBI officials suspected that Byrd-Bennett “illegally steered a controversial $40 million book deal to DPS” from her former employer, book publisher Houghton Mifflin Harcourt. To date, no charges have been brought against Byrd-Bennett for her questionable dealings while in Detroit.

After replacing Granholm as governor in 2011, Rick Snyder championed a new, more expansive emergency manager law, Public Act 4. When voters, rejected the anti-democratic law in 2012 for being too authoritarian, Snyder and the legislature came back with a slightly modified version that retained the unprecedented authority placed in the hands of appointed emergency managers.

The vast, unchecked powers placed in the hands of unelected bureaucrats were supposed to provide them the tools to get in, get the job done within 18 months and then get out. But reality proved to be a sharp contrast to lofty promises. Because the problem was essentially structural rather than managerial, Snyder and crew were forced to find a loophole in the law that would allow them to extend the absolute control they held over DPS. Rather than serve their entire 18-month terms, a series of EMs resorted to stepping down early, allowing the governor to appoint a replacement, resetting the clock so that another 18-month term could begin again.

What has been the result of this continual state control?

For starters, Detroit’s elected school board has been completely marginalized, given neither authority nor the funding to, say, conduct an independent forensic audit that would provide some sort of independent check on the unfettered actions of state appointees.

Read more about the ACLU of Michigan's investigation into Detroit Public Schools.

Making matters worse was former emergency manager Darnell Earley who, in a cost-cutting move made last year, eliminated the district’s Office of Inspector General, which served as an independent watchdog tasked with rooting out waste and corruption.

Along with the failure to rein in corruption, state control of the district has been an unmitigated financial disaster.

In January, Craig Thiel, a senior researcher at the nonpartisan Citizen Research Council, told the New York Times this about the job a string of appointed emergency managers have been doing since the state took control of the district in 2009:

“They each seem to be borrowing from the same playbook: figure out a way to get through the current year, end the year without going insolvent, and then push costs onto the next year in the hopes that things will improve in some way. They’re dealing with these debts that should have been paid off years ago that have instead been put on future budgets.”

As a result, the district’s outstanding debt has reached a jaw-dropping $3.5 billion.

Contributing to the crisis has been the state’s inability to stop the bleeding of students from the district. In 2008, the year before Lansing stepped in and took control, DPS had about 95,000 students. Since then, student enrollment has just about been cut in half, falling to about 47,000.

The financial crisis is primarily the result of state policy that has substantially reduced the amount of tax revenue deposited in the school aid fund,  and a funding formula that depends entirely on the number of students in a district; fewer students means less money. These are the bottom line issues that EM’s can’t address and make their efforts destined to fail.

Accompanying that extreme financial failure has been the state’s inability to improve the quality of education being provided Detroit’s public-school students.

“Despite being under the control of a state-appointed emergency manager since 2009, Detroit Public Schools, the state’s largest district, is failing academically and financially,” the Citizens Research Council reported in January. “It was recently reported that DPS ranked last in academic achievement (4th and 8th graders) among urban districts nationally on the National Assessment of Educational Progress. This was the fourth time in a row that DPS ranked at the bottom of all large city districts in the country. At the same time, the district has been grappling with chronic operating budget deficits, growing liabilities and indebtedness, and challenges to meet payroll.”

Despite Cotter’s claims that strict state control is needed to guarantee the ever-growing financial mess gets cleaned up, those who chose to live in a reality-based world must concede that, as with the Flint water crisis, the state’s hijacking of democracy in Detroit Public Schools has only worsened the mess.

"The vast, unchecked powers placed in the hands of unelected bureaucrats were supposed to provide them the tools to get in, get the job done within 18 months and then get out. But reality proved to be a sharp contrast to lofty promises."

State Board of Canvassers Votes Unanimously to Certify Promote the...

ACLU of Michigan Releases Documentary 'Here’s To Flint' on Flint...