The Flint water saga has taken some wild twists in the past few weeks.

Here’s a quick recap: On Dec. 29, 2015 – a day cynics would say was chosen to generate the least amount of coverage possible during the holiday lull – the Flint Water Advisory Task Force appointed by Gov. Rick Snyder issued a scathing critique of the Michigan Department of Environmental Quality’s (MDEQ).  In part, task force members reported that:

“Throughout 2015, as the public raised concerns and as independent studies and testing were conducted and brought to the attention of MDEQ, the agency’s response was often one of aggressive dismissal, belittlement, and attempts to discredit these efforts and the individuals involved. We find both the tone and substance of many MDEQ public statements to be completely unacceptable. …What is disturbing about MDEQ’s responses, however, is their persistent tone of scorn and derision. In fact, the MDEQ seems to have been more determined to discredit the work of others – who ultimately proved to be right – than to pursue its own oversight responsibility.”

Read more on state's attempt to cover up lead poisoning.

On the same day that letter was sent to Gov. Snyder, Dan Wyant, the embattled director of the MDEQ, resigned. His resignation letter has not been made public.

Also on that same day, Dan Wurfel, spokesman for the MDEQ, also resigned in disgrace. On his way out the door, Wurfel – the person spewing much of the scorn the task force criticized – played the sympathy card in a message, pointing out in an e-mail to contacts that he and wife Sara Wurfel, Gov. Snyder’s former spokeswoman, have a 3-year-old child, and how, as caring parents, he was certainly moved by the plight of Flint residents suffering from the lead contamination that Wurfel had consistently, and with much derision, denied existed.

"They [the victims in Flint] didn't feel like we cared. I care a lot. It's been on the front on my mind for months now ... the human aspect of this isn't lost on me," Wurfel added.

One day after the resignations, Gov. Snyder, for the first time, apologized for the contamination of Flint’s water supply and the harm it has caused. A little more than a week later, on the nationally syndicated public radio program Democracy Now, Flint resident Nayyirah Shariff, a key player in the citizen-led independent testing of Flint’s water last August that was pivotal in exposing the severity of the city’s lead problem, said Snyder could “flush his apology down the toilet.”

On. Jan. 6, 2016, the U.S. Attorney’s Office for the Eastern District of Michigan announced that it was conducting an investigation of the Flint water scandal. As we noted when breaking that welcomed news, it’s unusual for the feds to confirm that an investigation is under way, but did so in this case in order to assure anxious residents that attempts were being made to hold officials accountable if it is determined wrongdoing has occurred. A spokeswoman for the office, however, would not say if the investigation is either criminal or civil in nature.

On the same day that the Justice Department probe was announced, Gov. Snyder officially declared a state of emergency in Flint as a result of the lead contamination. His apparently reluctant declaration was notable for both its tardiness – it came a full three weeks after newly-elected Mayor Karen Weaver generated national headlines by making a similar declaration – and its admission that the crisis is directly related to the state’s decision to force Flint to begin using polluted river water.

The declaration states in part that, after the city began using the river as its water source, “the harmful effects of untreated water struck the city’s water infrastructure, causing leaching of lead into the water which caused damage to the water system and potential negative health impacts to the citizens…”

It is a stunning admission of guilt coming from an administration that for most of 2015 did all it could to first deny a problem and then, after that could no longer be done, tried mightily to lay cause for the crisis on aging infrastructure.

As late as Dec. 22, 2015, the aforementioned Brad Wurfel, was still trying to deny the existence of a connection between the lead leaching into corrosive river water and the lead showing up in the blood of kids, telling a local television station, “I’m saying there is a difference between blood lead levels and water lead levels … different testing, different sampling, different things … They are apples and cars.” 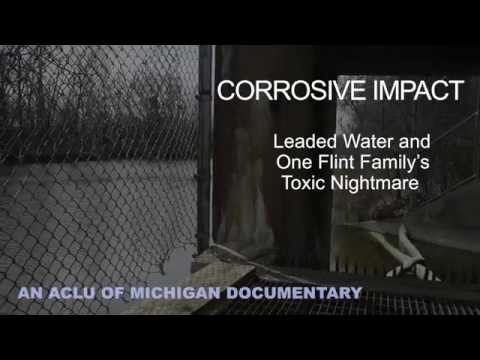 The intrepid Marc Edwards – the Virginia Tech professor who conducted the independent August sampling of Flint water and has been posting story after story on the web page FlintWaterStudy.org generated some national news of his own when he published a July  e-mail, obtained through the Freedom of Information Act, that has the governor’s office raising concerns about how the state was handling the crisis as it began to erupt publicly over the summer.

After obtaining the document from Edwards, NBC News ran with the story, reporting that Gov. Snyder’s then-chief of staff (who has since left his government job to become a lobbyist) wrote to officials at the state’s Department of health and Human Services, saying:

"I really don't think people are getting the benefit of the doubt. Now they are concerned and rightfully so about the lead level studies they are receiving. These folks are scared and worried about the health impacts and they are basically getting blown off by us (as a state we're just not sympathizing with their plight)."

But it wasn’t sympathy people were looking for. It was honesty regarding the lead-contaminated water they’d been exposed to since April 2014.

They – and the rest of us --  still aren’t getting straight answers to straight questions.

During his press conference with Flint’s Mayor Weaver, a reporter, referring to the water crisis, asked Gov. Snyder what he knew and when he knew it. The governor, having previously promised transparency, ducked the question, saying he’s withholding answers to such questions until his appointed task force has issued a final report.

Failing to give straight answers to legitimate questions is proving to be a particularly ineffective strategy. Celebrities such as Cher and filmmaker Michael Moore are starting to pile on. And on Sunday, Detroit Free Press columnist Rochelle Riley -- whose paper endorsed Snyder -- wrote a scathing piece asserting that the Flint crisis will be the defining act of Snyder's tenure in office.

Gov. Snyder is clearly in damage-control mode at this point. But, as Riley pointed out, the guy who billed himself as "one tough nerd" has already been permanently tainted by his administration's role in creating this crisis and the attempted cover-up.

The only question now, with both the Department of Justice investigating and a national media spotlight shining on the scandal, is how much worse things might get for the governor who came into office promising "relentless positive action."

"It is a stunning admission of guilt coming from an administration that for most of 2015 did all it could to first deny a problem and then, after that could no longer be done, tried mightily to lay cause for the crisis on aging infrastructure."

State Board of Canvassers Votes Unanimously to Certify Promote the...

ACLU of Michigan Releases Documentary 'Here’s To Flint' on Flint...